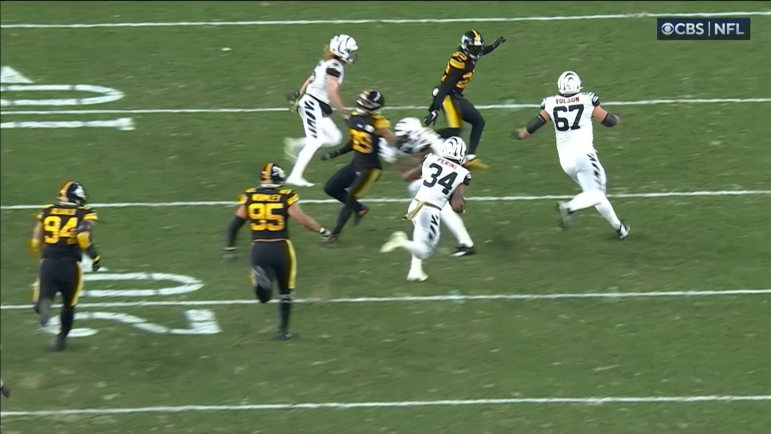 Sunday’s 37-30 loss to the Cincinnati Bengals shouldn’t be about blame game. Offense, defense, special teams. No unit was good enough to get the job done in a must-win scenario against a divisional opponent. Talk to Kenny Pickett and he’ll talk about the missed chances. Speak to Alex Highsmith and he’ll say the same. Highsmith did meet with reporters after the game and made no bones about his unit’s play.

“I just think our execution was really poor,” he said via Steelers.com. “Can’t beat ourselves in those times. We just gotta get better execution wise.”

The Bengals’ offense has now put up big points in half of the Steelers’ last four meetings. 41 points in a blowout 2021 win and 37 today. Pittsburgh’s defense made plays, created turnovers, but still allowed a crooked-number on the scoreboard. The Steelers’ offensive issues can be partially to blame but Highsmith knows the defense didn’t do a good job in situational football. He specifically pointed to red zone play as one of the defense’s biggest problem-areas.

“Especially with the red zone. Can’t give up all those touchdowns.”

Heading into the game, red zone defense was the one situational area the Steelers had consistently excelled in. They were 6th in the NFL allowing touchdowns at just a 50% clip. The Bengals are going to change that number, going a perfect 3/3 inside the 20 Sunday. That’s how an offense scores 37 points. They sure don’t do it by kicking field goals.

For the third time this year, Pittsburgh’s allowed 35+ points. While the Steelers’ offense put them in some tough spots, there were no pick-sixes or special teams touchdowns or any especially short fields to skew the numbers. The Bengals went on TD drives of 79, 92, and 93 yards in this game, wearing down and overwhelming the Steelers’ defense with big-names like WR Tee Higgins, lesser known players like RB Samaje Perine, and total unknowns like WR Trenton Irwin. While Higgins did his damage between the 20s, Perine and Irwin teamed up for the four Bengals’ touchdowns on the evening.

With the loss, the Steelers slip to 1-2 in divisional play, their season series against the Bengals over. They won’t play another North game until Week 14, their first meeting against Baltimore, before finishing with back-to-back division contests, Week 17 against the Ravens and Week 18’s finale versus the Cleveland Browns. Barring injury, QB Deshaun Watson will start that game, posing a tougher task for a Steelers’ defense who lost to a Watson-less Browns team once this season already.