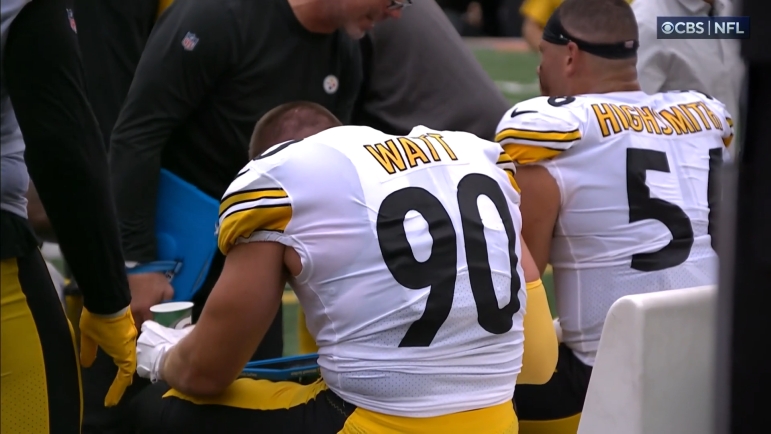 Needing a significant boost heading into the second half of the season, the return of T.J. Watt for the Pittsburgh Steelers is just what the doctor ordered.

After a dominant Week 1 performance defensively in an overtime win over the Cincinnati Bengals in which the defense forced five turnovers and sacked Joe Burrow seven times, the Steelers’ defense has taken a step back without Watt on the field after he was injured late in the Week 1 win.

Since that game, the Steelers have recorded just eight sacks on the season and just five other turnovers, falling from 1-0 to 2-6 coming out of the bye week.

Now, after a lengthy recovery that also reportedly included a surgery on his knee, Watt is set to take to the field once again in the black and gold, providing the Steelers with a significant boost as the reigning Defensive Player of the Year.

One player beyond thrilled to get Watt back into the fold is fellow outside linebacker Alex Highsmith. The third-year pro recorded three sacks in the season-opening win, but has struggled with the added attention minus Watt from a pass rush standing, recording just 20 pressures and 3.5 sacks since the season opener.

Alex Highsmith spoke to the media about the keys to the game, the defense + more. pic.twitter.com/zI5rY3a1s2

Speaking with reporters Wednesday inside the UPMC Rooney Sports Complex on the South Side ahead of the Week 10 matchup with the New Orleans Saints, Highsmith talked about the return of Watt to the lineup and what he’ll provide the defense moving forward in the second half.

“Just like I said earlier, having a guy back like that, I think he just adds so much to our defense,” Highsmith stated to reporters, according to video via the Steelers Live Twitter account. “Defensive Player of the Year. He’s the Defensive Player of the Year for a reason. Like I said, he just brings so much energy and so much splash and whenever he makes those plays it just adds juice to the whole team. We’re super excited to have him back.”

The Steelers are very excited to get Watt back, considering the impact he’ll likely have right away defensively. In that Week 1 win, Watt had multiple tackles for loss, five total tackles, a sack, multiple pressures and intercepted a Burrow pass at the line of scrimmage. He was a true game-wrecker.

Getting that guy back into the lineup will give a Steelers defense that is lacking splash and impact will do wonders for a defense that will be leaned on heavily in the second half of the season as rookie quarterback Kenny Pickett goes through growing pains offensively.

The return of Watt will also help Highsmith and defensive lineman Cameron Heyward see less attention on the opposite side of the formation, allowing those guys to potentially take advantage of some one-on-one matchups in an effort to get back to the dominant level of play the Steelers’ defensive front is capable of.