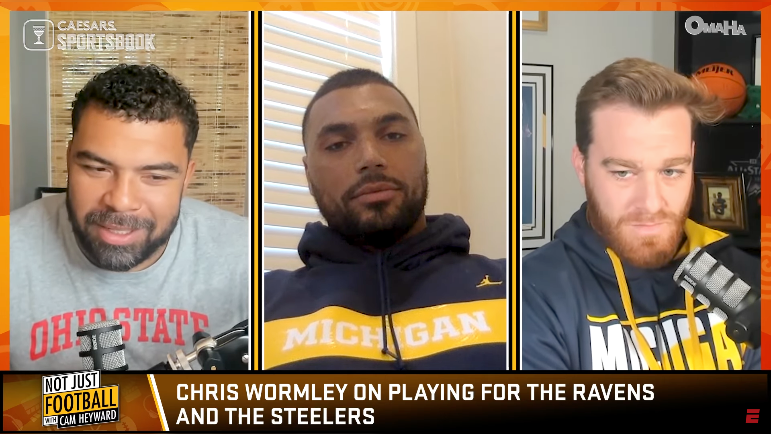 As a young kid growing up in Toledo, Ohio, Chris Wormley had plenty of options when it came to choosing his favorite football team.

From the nearby Cincinnati Bengals and Cleveland Browns, to the Detroit Lions in Michigan, and the Pittsburgh Steelers not too far away in Pennsylvania, Wormley had options. As is well-known by now, he ended up choosing the Steelers as his favorite team, following along closely like many other fans throughout his childhood and into high school.

While he continued to chase his professional football dreams, eventually playing at Michigan before being drafted by the Baltimore Ravens, Wormley never really envisioned himself being able to one day put on the black and gold uniform as a member of the Steelers. Then, a trade from the Ravens to the Steelers occurred on March 20, 2020.

Now, two and a half seasons into his tenure with the Steelers, Wormley — who appeared on the Not Just Football w/ Cameron Heyward podcast Wednesday morning — is living out a dream playing for the Steelers and longtime head coach Mike Tomlin.

“I enjoyed my time in Baltimore. I loved those three years, but these last two and a half seasons with Pittsburgh has been amazing,” Wormley stated to Heyward and co-host Hayden Walsh, according to video via the NFL on ESPN YouTube page. “I looked up to Mike Tomlin growing up as a black coach, winning a Super Bow, how he handled himself in the media and in the community. So these last couple years in Pittsburgh have been, for my 10-year-old self, a dream come true. It’s been pretty cool.”

During his time at the collegiate and NFL level, Wormley has played for some pretty big names in the coaching profession, including the Harbaugh brothers, Jim and John, at Michigan and Baltimore, and now Tomlin.

He’s received a tremendous football education overall in his last three stops, but as he stated to Heyward and Walsh, his time in Pittsburgh has been special because of the history he has with the Steelers as a young fan.

Wormley has told the story many times about becoming a Steeler fan due to his grandfather, who bought him a Steelers jacket that year, igniting a love-fest with the black and gold. Now, he gets to don the uniform every Sunday, making it all that more special while also sharing a sideline with a coach he’s admired from afar in Tomlin.

It’s not often that a player eventually gets to play for the team he grew up rooting for as a child, but when it happens its special, and it’s great to hear Wormley talk about what it means to be a Steeler and just how much he’s enjoyed these last few years. Hopefully, the Steelers have enjoyed their time together too and pursue a new contract with the 29-year-old rotational defensive lineman.