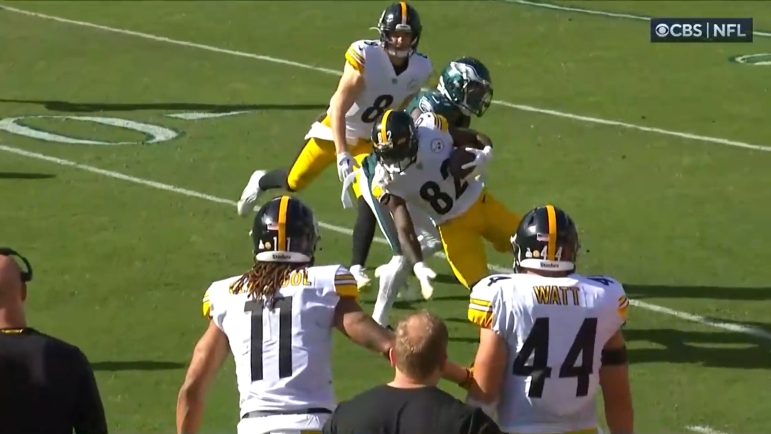 Reasoning: Sims appears to be in line to absorb the lion’s share of snaps the Steelers will lose moving forward after trading Chase Claypool to the Chicago Bears, teammates confirming that the veteran worked in the slot during practice prior to the break for the bye.

I replied to a comment the other day in an article about the Chase Claypool trade saying that, based on the events of Sunday’s game, it would seem likely that Steven Sims will be the primary beneficiary of the vacant snaps left behind. Somebody downvoted the comment—I’m not sure if it’s because he disagreed, or just because he didn’t want Sims to get them.

Whether one likes the idea or not, it does appear likely that it will be Sims, and not Miles Boykin or Gunner Olszewski, who will see the lions share of snaps when the Steelers run three-receiver sets moving forward, with Diontae Johnson and rookie George Pickens being the starters.

A veteran slot receiver who did have some production in that arena for the Commanders in 2019-20, Sims is by far the most natural interior wide receiver on the roster now, even if we can assume that the team will look at a variety of combinations (which I would argue that they should).

But more to the point, the Steelers already put Sims on the field for 11 snaps this past week on offense, which might not sound like a lot, but is proportionally significant relative to his previous opportunities. He was targeted three times on passes and also executed two jet sweeps, so he was targeted or touched the ball on nearly half of his snaps.

As a rookie back in ’19, Sims caught 34 passes for 310 yards and four touchdowns. He never matched that production, though he has hardly even been targeted 34 times since then. The Steelers, though, have a lot of experience with him. He spent all of the 2021 season on their practice squad. And he already has a helmet because he is their return man.