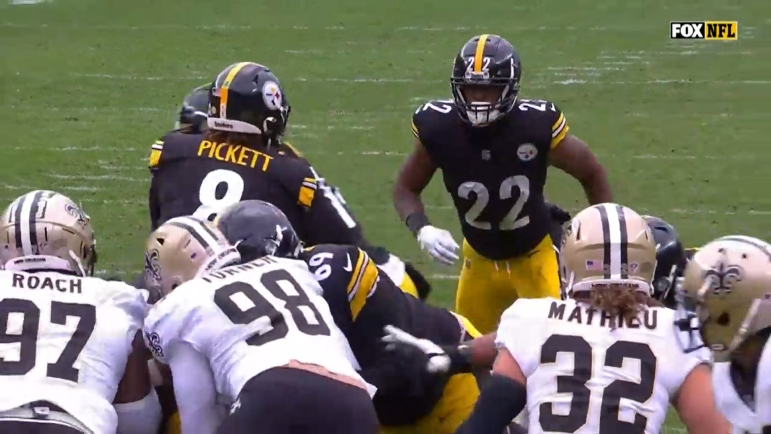 Reasoning: The second-year running back is coming off his best game of the season, rushing for 99 yards on 20 carries and showing some yards after contact that had been much more elusive this year than he had been.

The Steelers rushed 43 times yesterday, of which Najee Harris was responsible for 20 of them. It was a season-high for the second-year back, and more than they had as a team against the Buffalo Bills earlier this season. In fact, prior to yesterday’s game, the Steelers only had two games with 25 or more rushing attempts on the season.

But consistently trailing and inconsistent results from the running game, compounded by unfavorable down-and-distance situations, don’t ordinarily lend themselves to a lot of ground and pound. Yesterday’s game was one the Steelers felt they could take advantage of, and they did.

That was especially the case for Harris, who rushed for a season-high 99 yards, obviously coming up just a yard short of his first 100-yard rushing game of the season. That included a 36-yard open-field scamper that included a physical forced missed tackle at midfield and another violent encounter at the sideline before he was finally taken down.

There is still considerable work to be done, but Harris did finish the game with nine successful runs out of his 20 attempts, and only one run of negative yardage. Even though it’s always respectable to shoot for higher, 45% is a solid successful run percentage for a game. It’s a start.

Now his game wasn’t without warts. Most notable is the fact that he fumbled, his first real fumble in a regular season game, though Chukwuma Okorafor was able to bail him out. He also had a shot at a 21-yard touchdown grab early in the second half that he couldn’t hold on to, though it would have been a very good catch.

The Steelers must continue to see more of this Najee Harris, and particularly the good that he did on the day. By no means was this on the whole a ‘complete’ performance, but it’s the closest that they have been able to come, and that’s a start.