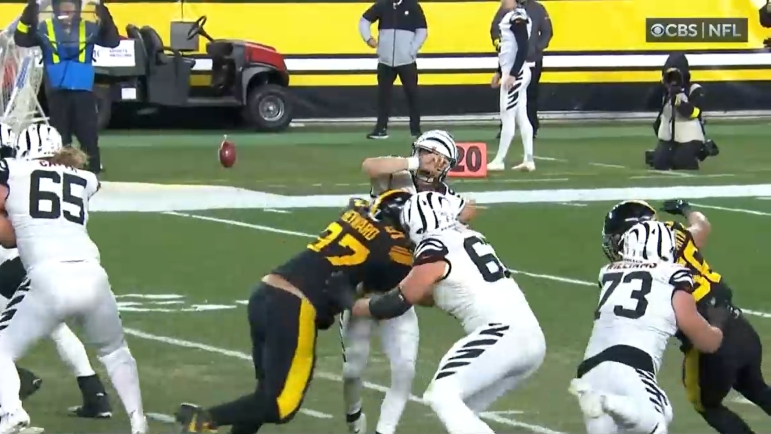 Reasoning: In spite of the ultimate result of the game, longtime veteran defensive lineman Cameron Heyward by and large had himself a very good game. He took advantage, as he did in the season opener, of rookie starting left guard Cordell Volson, filling up the stat sheet in the process.

End to end, you might not be able to say that this has been the best season of Cameron Heyward’s life, but that’s no slight for somebody who has emerged as a perennial All-Pro in the second half of his playing career.

Things have picked up somewhat more in recent weeks and he’s been able to finish his pass rushes more successfully as well. He is now up to four sacks on the season after registering one on Sunday against the Cincinnati Bengals, and three of those have come in the past five games.

Heyward also finished Sunday’s game with a season-high seven tackles, of which two were for loss, and he added a couple of quarterback hits on Joe Burrow for good measure. He, of course, had his trademark chase-down tackle well down the field as well.

And he did it playing 52 snaps, about 80% of the Steelers’ total number of defensive snaps for the game. It was only the second time since Week 3 that he had played that many snaps in a game, but he seemed no worse for wear for it.

While the defense as a whole disappointed on Sunday, allowing the Bengals to put up 37 points—one off their season-high allowed to the Buffalo Bills—I frankly put the blame primarily on the secondary. I certainly wouldn’t cite Heyward as a weak link in this one.

Not that he’s going to take any solace in that, and I’m sure we’ll hear him talk about how awful he was in his podcast this week. But perhaps any competitor worth his salt should struggle to find words of self-praise in evaluating his performance in a losing effort because, ultimately, it wasn’t good enough to win.