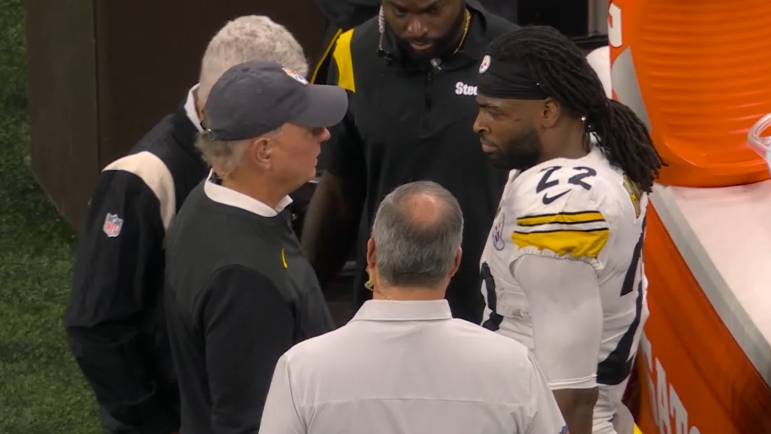 Question: Will Najee Harris miss time with his latest injury?

Running back Najee Harris exited last night’s game late in the first half with what the Steelers classified as an abdominal injury. It’s unknown at this point the extent of the injury. He did seem to leave the game temporarily earlier on before returning briefly, and even scoring a touchdown, then left once again.

But it was a good day for the ground game overall, even though their number two back, Jaylen Warren, didn’t even dress due to injury. Benny Snell Jr. rushed for 62 yards and a touchdown of his own on 12 attempts, while Anthony McFarland Jr. had 30 on six. Harris rushed for 35 and the score before exiting, while quarterback Kenny Pickett added 32, including at least one designed run.

Add in a nine-yard jet sweep from wide receiver Gunner Olszewski and a four-yard fullback dive for Derek Watt, and it all adds up to 172 yards on the ground, a 4.8-yard average, on 36 total rushing attempts, compiled in a variety of ways.

Might that coax the Steelers into being a little bit more conservative with Harris? They are already working on a short week coming off of a Monday night game, so the turnaround will be abbreviated.  Recovery time is precious.

Harris had just had his two best games of the season prior to Monday night’s win over the Colts, rushing for 189 yards with two touchdowns on 40 carries over that span. He showed flashes of the same last night, yet often looked labored.

With Warren also coming back from an injury—he did not practice at all last week—it is unclear as we sit here this morning who the Steelers will have available in the backfield the next time they take the field. Could Snell get the start—and have Master Teague III called up from the practice squad? That’s a worst-case scenario, of course.