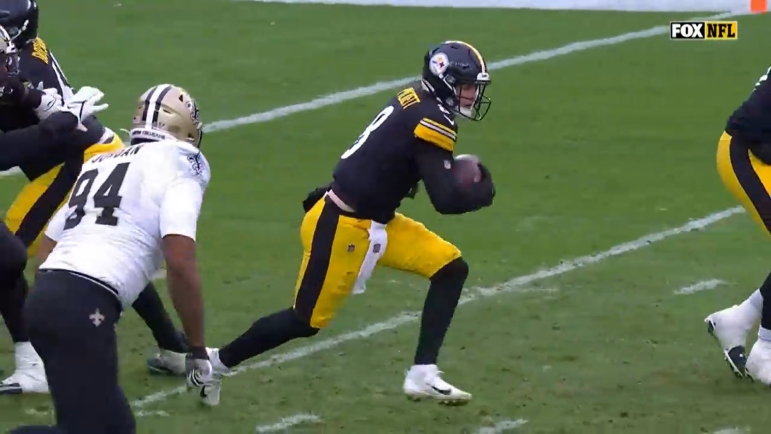 Question: Will we see quarterback Kenny Pickett continue to scramble more as he gains comfort?

The Steelers obviously didn’t draft Kenny Pickett to be the next Lamar Jackson, but they did draft him because they knew that he could move around and even take off when he has to. How often, though, might he feel like he ‘has to’ take off?

That’s the question I want to explore, because we have been seeing the rookie quarterback growing increasingly comfortable making the decision to scramble in recent weeks. His season-high seven rushing attempts on Sunday (not including one kneeldown) featured two quarterback sneaks, as well as a designed run on an option, but it also featured four scrambles.

To be clear, let’s set the definition of what a scramble is. A quarterback scrambles when a play is designed to be a pass but instead produces a rushing attempt after efforts to attempt a pass fail, either due to pressure, covered targets, or operational failure.

Pickett has now scrambled nine times in the past two games. That’s more than he had in all of his playing time up to that point. But Sunday’s numbers are the most noteworthy because the Steelers only had 40 dropbacks (pass attempts plus scrambles plus sacks), a season-low for Pickett in games he’s started and finished. So he scrambled on 10 percent of his dropbacks.

The key here is that he has been effective as a scrambler. On 17 total scrambled (including two on which there were penalties), he has picked up 132 yards. The majority of his scrambles have produced successful plays for the offense, while a few others on 3rd and long gave them at least the chance to make a play on 4th and short. He converted multiple 3rd and longs on scrambles.

We now know firmly that this is in his repertoire, but how much will we see it? The Steelers obviously want him to pass first, and no doubt he wants to as well, but both he and the coaches know that they have an effective weapon with his legs if the situation calls for it.