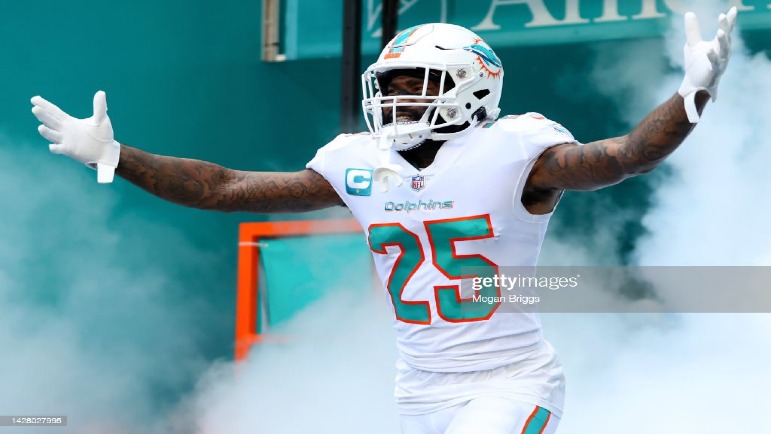 The Pittsburgh Steelers are going up against one of the best cornerbacks in the NFL on Sunday night in Miami Dolphins cornerback Xavien Howard. Howard’s resume speaks for itself, as he’s an All-Pro and three-time Pro Bowler. He will likely cause problems for the Steelers on Sunday, which Mike Tomlin discussed with Bob Pompeani on his weekly show, The Mike Tomlin Show, posted to the team’s YouTube channel.

“They’ll put him on matchup-related things and put him on what they view as your top receiver. Sometimes they’ll put him on what they view as your second receiver and they’ll thoughtfully take the double elsewhere, not wasting him in a double,” Tomlin said. “His man-to-man covers skills really change schematics of a game. They could lock him on somebody and minimize him and take their attention elsewhere, or they can include him in some schematics. He’s highly competitive and has been for a long time.”

The Miami Dolphins and defensive coordinator Josh Boyer use their All-Pro corner as a chess piece, moving him around to take away opposing weapons. What will be interesting is who Boyer wants Howard to match up against. With Chase Claypool likely in the slot it won’t be him, leaving Howard’s matchup to be with either Diontae Johnson or rookie George Pickens.

As Mike Tomlin said, whoever Howard does not cover could see a double team. My guess is due to the jump ball ability of George Pickens, the Dolphins will choose to double him and leave Xavien Howard on an island against the shifty Johnson.

This matchup would be interesting as both Howard and Diontae Johnson have had down seasons by their standards. Howard has yet to record an interception and has already been credited for giving up three. For reference, last year he only gave up six touchdowns, and in his All-Pro season in 2020, he only allowed four. In addition, the passer rating when throwing in Howard’s direction has skyrocketed this year, as he is allowing a 135.1 rating this season compared to only 72.6 last season.

On Diontae Johnson’s side, he has struggled with drops and poor quarterback play. Johnson has been credited with two drops this year, but some may argue he has had more. In addition, Johnson has yet to eclipse the 100-yard mark on the season.

With the way the Dolphins scheme their defense up around Xavien Howard, offensive coordinator Matt Canada will need to find a way to beat him. Does Canada have enough trust in rookie quarterback Kenny Pickett to test the former All-Pro corner, or will the gameplan be to play conservatively and stay away from Howard? Football is a chess match, and this one will be a fun one to watch play out under the lights on Sunday Night Football.