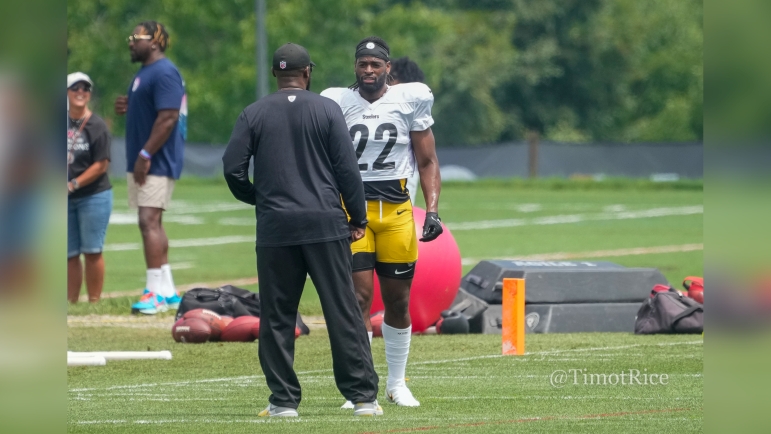 When asked if the foot injury that RB Najee Harris suffered early in training camp and again in Week 1 against the Bengals has been the cause of his show start to the 2022 season, Tomlin suggested that the ailment could be an issue along with the team’s performance as a whole to this point.

“He missed some time in team development and that may be a component of him finding or not finding rhythm,” Tomlin said to the media Tuesday which aired live from the team’s YouTube channel. “But probably, it’s just reflective of kind of where we are. It’s tough to analyze individual components or something when things unfolded, particularly last Sunday the way that they unfolded from a collective perspective.”

Tomlin defended his team captain and former first-round pick who notably struggled against the Buffalo Bills on Sunday, where he amassed only 20 yards on 11 carries (1.8 YPC) and three receptions for 16 yards during the contest while playing 37 offensive snaps. In comparison, rookie UDFA Jaylen Warren carried the ball only five times, but gained 24 yards (4.8 YPC) and caught four passes on five targets for 39 yards on 38 offensive snaps, playing more snaps than Harris in the laugher.

While Pittsburgh was getting blown out and it made sense for them not to have their former first-round pick out there on the field taking unnecessary punishment, Warren has outplayed Harris for much of the season prior to Week 5 from an efficiency standpoint. He has been the more explosive runner, a capable pass-catcher out of the backfield, and has excelled in pass protection, playing better than his running mate in the backfield up to this point. Tomlin mentioned in the press conference that Warren’s role has increased as the team’s new third down back.

Warren served as the team's 3rd down back Sunday and in the blowout, played one more snap than Najee Harris. #Steelers

Harris may still be hampered by the Lisfranc injury on the first day of pads in training camp, meaning the increased use of Warren could be a good thing as Harris attempts to get healthier while taking less of a beating playing nearly every offensive snap. Still, while the ineffectiveness of the offense as a whole likely has led to some issues in terms of Najee Harris’ production, he still has shown issues in terms of pass protection, hitting the correct hole, and an overall lack of explosiveness, which was known when he came out of Alabama. Warren has become a rare UDFA gem in the meantime, making most of the opportunity allotted to him in preseason and regular season action.

Hopefully, Harris can regain his form as he gets farther away from the foot injury and look more like the player we saw at the end of 2021 compared to the start of 2022. Until then, we can likely expect a similar trend to continue with Harris leading the backfield, but Warren contributing a fair amount as well both on the ground and through the air.