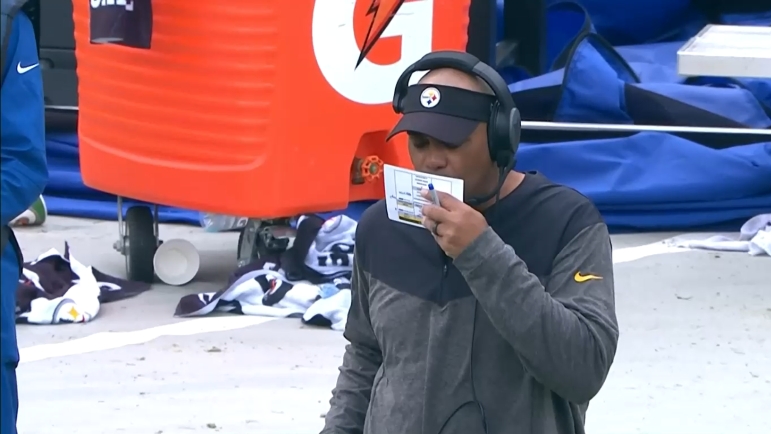 The Pittsburgh Steelers’ defense has had a tough time closing games out each of the last three weeks. After a back-breaking drive that lasted over six minutes against the New England Patriots where the Patriots used the ground game to chew the clock and end any hopes of a Steelers comeback, the Cleveland Browns put together a similar drive between the end of the third quarter and the start of the fourth in Week 3 to give them a two-score lead. Last week, with Pittsburgh clinging onto a three-point lead, the New York Jets went 65 yards in 10 plays and 3:15 to go up 24-20 with 16 seconds left to clinch the upset win at Acrisure Stadium.

Defensive coordinator Teryl Austin knows that the defense can’t keep allowing points in the fourth quarter in close games. He said that he believes the plays to help the defense get off the field will eventually end up in Pittsburgh’s favor.

“I just think it’s a matter of we just have to figure out how to make those same plays in the fourth quarter when it’s time. We’ve been in position, we’ve given ourselves opportunities to win games, and then we have to come up with the plays at the appropriate times to get off the field and turn the tide and stop momentum. All those things come in. Our guys are working their butts off and it’ll come, because I think the one thing the team and people around here know is how fine the line is to win and lose games and what it takes. We’ve been in a lot of close games here. I think eventually it’ll turn in our favor, and we’ll start making those plays,” Austin said via official transcript provided by the team.

One example that stands out from the Week 4 loss was a 4th and 7 with 9:48 left and the Steelers leading by 10. Instead of getting off the field and the Steelers getting the ball at their own 39 with a chance to make their two-score lead a three-score lead, Zach Wilson was able to hit Corey Davis for 22 yards and a first down. The Jets scored later in the drive to make it 20-17.

It’s those situations where the defense has to get off the field. Allowing teams to convert on third and fourth down late in games is not a recipe for sustained success. As Austin said, it’s a fine line between winning and losing games. If Pittsburgh gets off the field on that fourth down play, they probably don’t lose on Sunday. Obviously, it’s not entirely on the defense, and Kenny Pickett’s second interception helped set the Jets up for their game-winning drive. But with a ten-point lead in the fourth quarter, the Steelers’ defense has to find a way to get a few stops, and they weren’t able to.

Personnel-wise, they were down both Ahkello Witherspoon and Terrell Edmunds, along with T.J. Watt. Losing Edmunds in-game hurt and eliminated some of their secondary depth, but regardless, the defense is too talented to play the way they have down the stretch. I do think they’ll pick it up, but the opposing offenses don’t get any easier, with Buffalo and Tampa Bay coming up in the next two weeks.

One issue for the Steelers has been their lack of pressure. With injuries in the secondary, they have to find a way to dial up pressure sans Watt, and they haven’t really done so effectively so far. They got pressure against Wilson last Sunday, but they could only bring him down once. They had no sacks against the Patriots and two against Cleveland. The lack of consistent pressure is allowing teams to get into 3rd and manageable situations that are a lot easier to convert than a potential 3rd and long would be if there was a sack at some point during the drive.

There are other reasons why the defense isn’t finishing, but it’s something that has to change. For as maligned as the offense has (deservedly) been, the defense has to step up late in games. So far, that’s not happening, and it’s a big reason why the Steelers are currently 1-3 with their backs up against the wall.