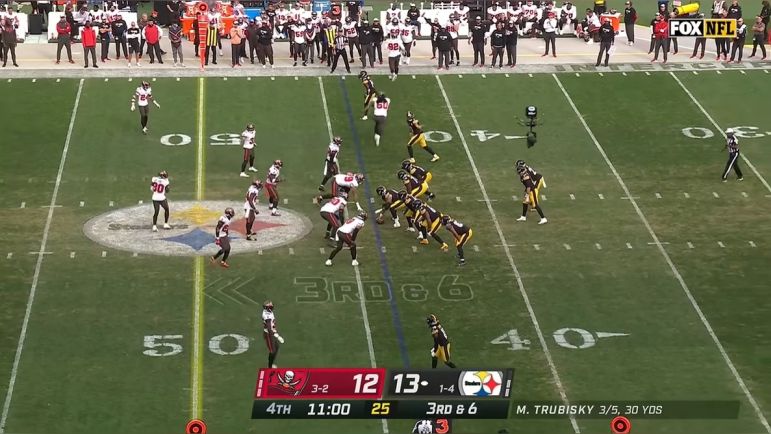 Coming out of halftime the Pittsburgh Steelers, who opened as a consensus 7.5-point underdogs at home for the first time in franchise history, were leading 10-9 over Tom Brady and the Tampa Bay Buccaneers. As elating as it was to be winning through the first 30 minutes, it was an equally inauspicious feeling knowing that the Steelers’ offense was only able to generate 38 yards on the three drives after a rare opening touchdown drive.

However, Steven Sims’ 89-yard kickoff return to open the second half injected some hope that the Steelers may be able to get a decisive lead in this game before Brady went back to work.

That hope was only shortlived as the Pittsburgh offense would falter to its third-straight three-and-out having to settle for a field goal after the electric return. The feeling turned back to one we felt last week in the first half against the Buffalo Bills. The defense has held up well, but when is that dam going to break?”There’s simply no way that this beat-up, makeshift defense will be able to contain Tom Brady the entire game.

On the following Buccaneers drive, after nine-straight plays from in the red zone, the Steelers’ defense held strong, forcing a field goal. With the Steelers clinging to a 13-12 lead, matters would only begin to look worse. Rookie QB Kenny Pickett would leave the game shortly with a concussion from his head snapping off the turf.

With Mitch Trubisky warming up while Pickett was being gingerly walked off the field, a collective groan could have been heard through Steelers Nation as reality set in that Trubisky would likely have to finish this game.

Trubisky did himself no favors in the eyes of Steelers Nation, ending his first drive by throwing behind an open Diontae Johnson on a third-down comeback and then another three-and-out on his second drive. The boobirds were raining down on Acrisure Stadium, as the stage was seemingly set up for another Tom Brady win against the Steelers.

With the Pittsburgh defense continuing to hang strong, the Mitchell Magic would start to come out on his third drive. After being backed up by poor running plays, Trubisky was able to find George Pickens on 3rd and 13, the first of three huge third-and-longs that the Steelers’ offense would convert in the final quarter.

We’re now brought to our turning point in the game. After two more Pittsburgh runs, the Steelers are faced with a 3rd & 6.

Trubisky and the offense decide to use tempo after the second run and hurry back to the offensive line. This tempo catches the Buccaneers substituting and causes all types of problems with their coverage that was struggling with busts throughout the day.

This coverage bust was for a different reason though. You have to give props to Trubisky for ensuring this ball was snapped while Tampa still had an extra man on the field and before they could call a timeout.

Tampa Bay’s middle linebacker, Lavonte David, was trying to call one just as the ball was snapped, but wasn’t rewarded it. He then chose to stand there instead of engaging in the play, leaving rookie Connor Heyward wide-open up the seam to make the biggest play of the day for the Steelers’ offense.

This time, the Steelers’ offense would take advantage of being in the red zone, scoring a touchdown a short two plays later on a pass to Chase Claypool. the first touchdown of the season for a Steelers wide receiver.

There would be some big plays occurring after this one such as the Devin Bush two-point conversion break up, Trubisky falling on the botched shotgun snap, and the third-down conversion by Chase Claypool, but in my opinion, this drive was the difference.

It not only took a lot out of the faltering Tampa Bay defense with another coverage bust but also instilled a lot of confidence in Trubisky and Claypool to go out and finish this game themselves.