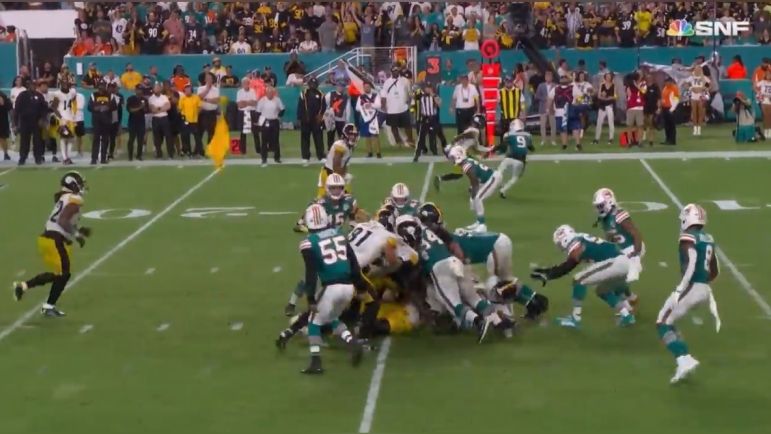 There is no question, the Pittsburgh Steelers offense is bad. Averaging just 15.2 points a game in the NFL isn’t going to cut it, and unfortunately, no matter how long their defense works to keep them in games, they continue to spoil it. One could easily point to the offense committing ill-timed penalties as a large reason why many of the Steelers’ promising drives are stalling.

That was no different in Miami.

To get us to our turning point, we’ll have to fast forward. I promise you, you’re not missing much. Don’t believe me? Let’s take a look at the games’ second-half drives prior to our circled turning point. 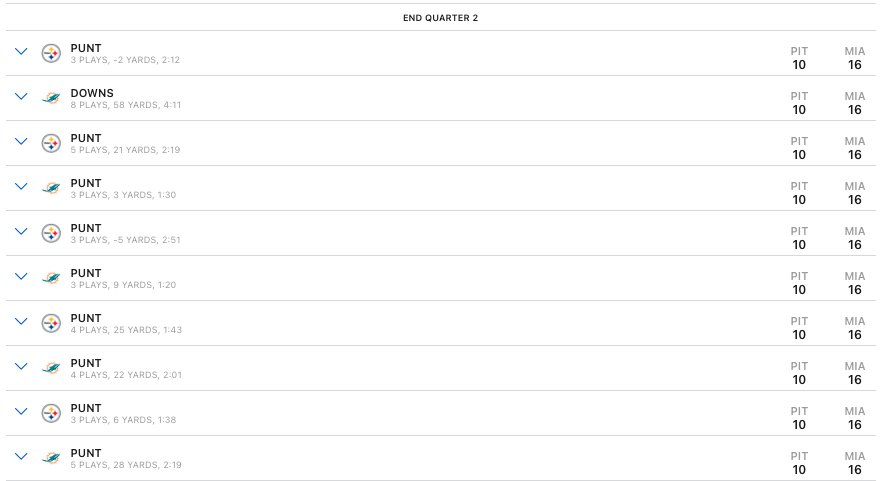 Believe me now? Alright, let’s get into it. Thanks to the valiant effort of the Steelers’ defense, they’re only down 16-10 with 7:56 left in the game, and finally, they begin to put together some sort of an offensive drive since their lone touchdown drive in the first half.

Behind catches from Pat Freiermuth, George Pickens, and Chase Claypool, the Steelers were able to march from their own 18 to the Miami 15 with only 3:17 left in the football game. Of course, this is when the penalties begin to rear their ugly head for the Pittsburgh offense.

On 3rd & 1, Matt Canada chooses to go with a QB sneak, a play that has yielded great success this year, no matter who has been under center.

The new trend in the NFL is getting an extra pusher behind the QB for the sneak. This time, it bites the Steelers in the backside. The whole right side of the offensive line isn’t fully set before Kenny Pickett waves wide receiver Miles Boykin in motion. Per the NFL rule book, all of the offensive players must be in a set position for one full second after the last formation shift before the ball can be snapped.

Let’s take a look at the All-22 as it shows the play from the huddle break. It seems as if Pickett is anxious to get the play off, possibly due to his own number being called. The right side of the line does take longer to get set, but it’s the QB’s job to ensure they are indeed set before he waves a player in motion. Instead, while looking right over them, Pickett waves Boykin to start the motion.

At this point, the play clock reads 10 seconds, so there’s no need to be in a rush to snap the ball, even with the motion. It results in a killer five-yard penalty instead of a fresh set of downs inside Miami’s 15-yard line.

The irony in all of this is literally two plays before Pickett shows the knowledge to ensure that the offense doesn’t pick up an illegal shift as both Zach Gentry and Claypool go in motion at the same time before a Najee Harris run.

Pickett has them both reset for a second before waving Claypool back in motion and handing the ball off. It’s perfectly executed by Pickett. His judgment, I believe, was simply clouded two plays later due to being amped up for his QB sneak opportunity. It’s a learning experience to say the least.

Following the illegal shift on the sneak, the offense wasn’t done shooting themselves in the foot. Now a 3rd & 6, Pickett scrambles left out of a relatively clean pocket and it causes Dan Moore Jr. to get caught holding as the Dolphins’ edge rusher, Melvin Ingram, reacts to Pickett scrambling.

In case you thought the self-inflicted gunshot wounds to the foot were complete, the gun still has bullets left in the chamber.

This sick, psychological experiment of an offense successfully turned a 3rd & 1 conversion into a 3rd & 16 and yet things still are about to get worse. Queue Clark Griswold.

Diontae Johnson is easily the best route runner on this team, but this is not his best rep. He’s lined up in the slot running a 7-step stop route. At the top of the route, instead of sticking his foot in the ground coming back to the football, see as he actually fades further downfield and never comes back to the ball.

He’s likely trying to fade closer to the first down marker, but on a timing pattern, it has to be precise. That matched with Pickett’s lack of elite arm strength gives Miami’s Jevon Holland ample time to jump this route and eliminate Pittsburgh’s chance of points on the drive.

While we all know the Steelers’ offense would ultimately get another crack at winning the game, this drive changes the makeup of the entire game. Had they converted the 3rd and 1, without penalty, they’re in a prime position to take the lead. If they only end with three, the last drive decision-making of Pickett and the offense can be a lot less aggressive. Pickett, in particular, likely doesn’t feel the need to try to squeeze the ball into Diontae Johnson on the game’s final interception.

The penalties truly were killer and Najee Harris said it himself post-game.

“Penalties. Penalties. Pre-snap penalties,” Harris stated to reporters, according to the official transcript provided by the team. “I think that the pre-snap penalties affect us at the wrong times, at the most important parts of the game, like key moments in the game it affects us negatively. It changes up the play-calling, and obviously, penalties are killing us. Not looking at the film, just walking off the field – penalties.”