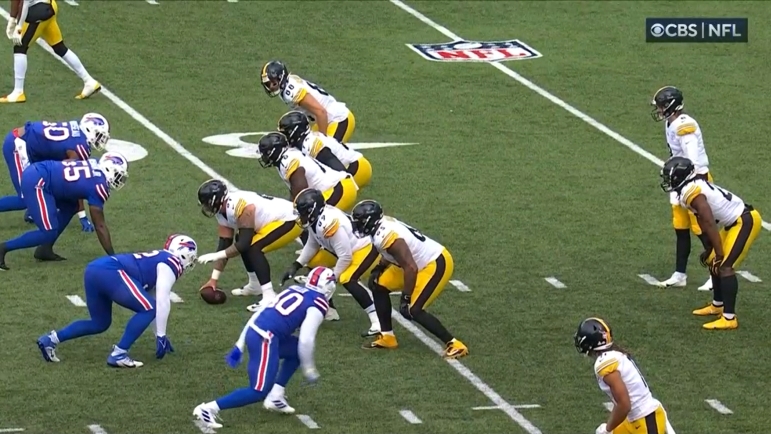 One week after jumping all the way up to No. 13 in the NFL following a stretch of play that saw them gaining more and more respect as the season wore on, the Pittsburgh Steelers offensive line had a rough go of things in Orchard Park in Week 5 — much like the rest of the Steelers’ roster — causing the position group to fall nine spots in the latest offensive line rankings from Pro Football Focus Wednesday.

The Steelers fell from No. 13 overall to No. 22 overall, dropping nine spots as the unit struggled against a terrific Buffalo front seven, allowing three sacks of rookie quarterback Kenny Pickett in his first career start, while also allowing a ton of pressures and generally struggling to run the football before being made into a one-dimensional offense.

Sunday’s struggles against the Bills offensively weren’t all due to the Steelers’ offensive line, but the point remains that they weren’t good enough, corresponding with a nine-spot fall in the latest PFF rankings, according to Sam Monson.

It was a rough afternoon for the Steelers’ offensive line, there is no denying that. The inability to open up lanes in the run game, the amount of pressure allowed on Pickett and the struggle with penalties really led to a poor day overall from the black and gold in the trenches offensively.

It won’t get any easier in Week 6 as the Tampa Bay Buccaneers come into town with one of the top defenses in football. Defensive tackle Vita Via is one of the very best interior defensive linemen in football, while pass rusher Shaquil Barrett leads the team with 16 pressures. Tampa Bay also blitzes more than most teams do, though those blitzes aren’t generating as much pressure overall as they should be.

Coming off of a poor showing which has raised questions about not only the run game, but second-year running back Najee Harris once again, leading to debates about Harris versus undrafted free agent Jaylen Warren. The offensive line needs to rebound in a hurry, starting in Week 6 against a tough Buccaneers’ defense.