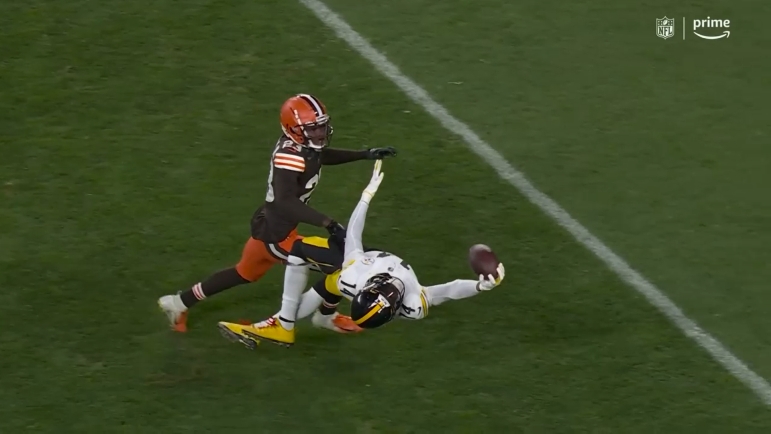 George Pickens’ NFL career can be summarized in four moments: his video of being drafted; his first touchdown in the preseason; his Beckham-like catch last Thursday; and his target in the end zone that came after that and nearly resulted in an interception.

We don’t need to break down every play, but of course that Beckham-like circus catch drew headlines, and it has quickly become his calling card in his young career. It was affirmation for all of the people who had him as a favorite to win the Offensive Rookie of the Year Award in the preseason.

But it’s not enough, and his head coach knows it. One catch is good for the start of a highlight reel, but it’s not going to win you many games. It’s easy to marvel at the individual talent on display as you admire the angle at which he hauls in the pass, but that ball goes back into play for the next snap either way.

“I don’t think any of us were shocked by it, to be quite honest with you”, Mike Tomlin told Stan Savran during last night’s installment of the fittingly named Mike Tomlin Show. “We need to see more of it. We need to put him in position to make more of those. Obviously, that’s an agenda of ours. But I don’t know that any of us who were in Latrobe and been a part of team development were shocked by that display of talent”.

Bottom line, we know that’s something that Pickens has in his arsenal, but ‘circus catch’ isn’t in the playbook. You know one of Tomlin’s most recurrent sayings is ‘make routine plays routinely’, and that’s where the rookie needs to get to.

So let’s talk about that fourth ‘moment’ that I mentioned at the top of the article. Pickens runs a sluggish route on that play, which probably contributes at least to some degree the fact that he has to attempt another circus catch. I don’t know that going up with two hands instead of one would have made much of a difference at that point, but the route itself needs to be cleaned up.

Pickens acknowledged this past week that taking his frustrations over his lack of production out on the field doesn’t help anybody. “You can let your frustration out”, he said, “but you still didn’t get the ball”. He said he knows he has to adopt a play-to-play mentality.

And that mentality has to include taking every play like it’s a significant one, that any one of them could feature him, whether it’s as a receiver or as a blocker or even just as the guy who’s around to recover a loose ball or tipped pass. He has to be ready for any situation whenever the ball is in play. And hopefully that will come in time, because the circus catches will be there.