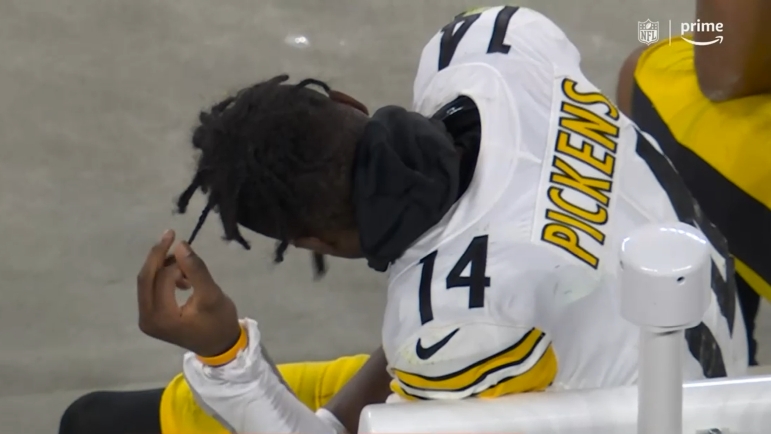 In spite of the fact that he has already been meme-ified three times since the time he was drafted by the Pittsburgh Steelers back in April, rookie wide receiver George Pickens has yet to take the league by storm. He has made some very pretty, even remarkable catches, to be sure, yet sometimes it may be that there is more storm in his disposition than his production.

That is in no way a knock on his talent, of which he clearly has a great deal, and I have no doubt that he will develop into an excellent player. But right now he has about as many catches as he does moments of visible outbursts of frustration on the field, which isn’t what you want.

There were some concerns, which the Steelers seemingly did not share, about Pickens and his maturity level coming out of Georgia. Yet many who did share those concerns believed that he wound up in the right place under head coach Mike Tomlin in Pittsburgh.

Thus far, frankly, it hasn’t exactly been a big deal. The biggest concern with him right now is some lazy habits in his route running. He has been visibly annoyed about not getting a target here and there, which is just going to happen on occasion, and he is apparently a talker on the field, but I don’t think anybody would be particularly concerned if not for the pre-draft ‘red flag’ warning.

Team captain Cameron Heyward did talk about this topic yesterday, saying on the latest episode of his Not Just Football podcast that “The youngness in George comes out” in those moments, “and you’re just like, ‘man, you can’t show all that emotion out there’.

Pickens is young, of course. He’s 21 years old. And he probably has some pent-up frustrations about the past two seasons. He dealt with a torn ACL that limited his ability to contribute during his final collegiate season, so he’s no doubt rather eager to start contributing as much as he can.

His time will come, and perhaps this period will help him grow. He always seems to be composed during interviews. He says that he knows he has to learn to take it one play at a time. Now he has to put that in action and make sure that he follows his own advice.