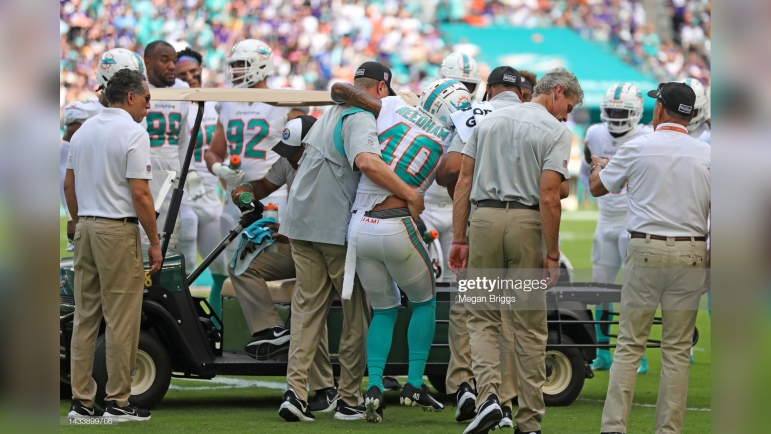 The Pittsburgh Steelers managed to snap their four-game losing streak on Sunday, coming against a struggling Tampa Bay Buccaneers team. Even though they were the decided underdogs, they never trailed, and I’m guessing the prognosticators now see the team’s next game against the Miami Dolphins as one that’s more winnable.

The main reason that few gave the Steelers much of a chance last week was for the simple fact that their secondary was absolutely riddled with injuries, with only one starter playing. Well, the Dolphins’ secondary might not be in much better shape coming into this one.

While Miami still has Xavien Howard as its number one cornerback and the young starting safety duo of Brandon Jones and Jevon Holland, they are hurting at the cornerback position besides. Keion Crossen is also dealing with a knee injury right now and is probably unlikely to be able to play, as well.

Of course, the Steelers showed just a couple of days ago that you could win a game with a makeshift secondary if you commit to a scheme and exploit the unknowns. But perhaps Pittsburgh would be better prepared for that as a possibility, having just gone through it themselves.

In the meantime, the Dolphins are preparing to welcome quarterback Tua Tagovailoa back to the starting lineup after missing time with concussion issues, while the Steelers face uncertainty of their own. Their own starter, Kenny Pickett, suffered a concussion on Sunday; if he can’t go, Mitch Trubisky of course will start.

Should Tagovailoa not be ready to return, backup Teddy Bridgewater is also available again, and would start in his stead. Skylar Thompson started on Sunday, and it did not go particularly well in a 24-16 loss, going 7-for-13 for 89 yards before exiting with a thumb injury. Bridgewater replaced him, having dressed as an emergency backup.

How healthy will the Steelers’ secondary get? All-Pro Minkah Fitzpatrick is the most important question mark, missing the game due to a knee injury. Levi Wallace missed the game due to a concussion. Cameron Sutton and Ahkello Witherspoon are dealing with hamstring injuries.