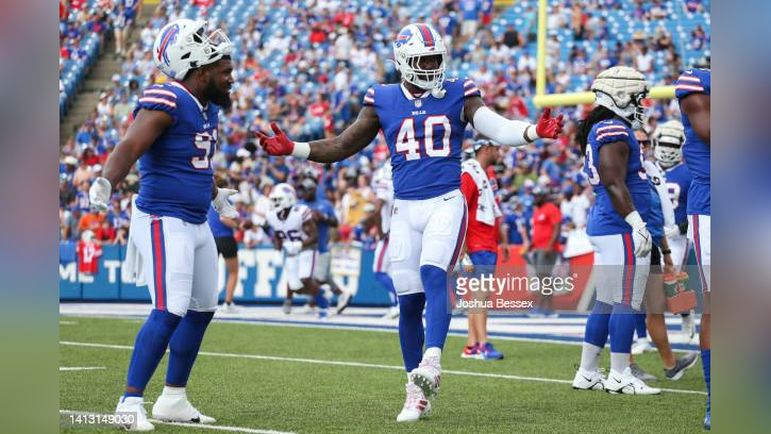 The Buffalo Bills are loaded on offense. Josh Allen at quarterback, Stefon Diggs at wide receiver, a solid offensive line and one of the most potent schemes in the game. But their defense is nearly just as strong with talent at every level. They bolstered that unit this offseason by signing future Hall of Famer Von Miller off the EDGE. Speaking during his Tuesday press conference via the team’s YouTube channel, Mike Tomlin praised Miller’s career and long-term success, questioning if he was even an earthly being.

” It’s Von Miller. Some guys are aliens visiting from another planet, you know?”

Father Time hasn’t gotten to Miller yet. At 33, he remains an impact player coming off the edge with three sacks this season. It’s another chapter to a historic career, spending ten years in Denver and putting up over 110 of them before being traded to the Los Angeles Rams, helping them win a Super Bowl last year. Miller has an explosive get-off and is one of the league’s bendiest edge rushers, the old saying being he’s a guy who could run under a coffee table.

“Some guys are even freaky in our setting. And he’s just one of those guys since he came out of A&M. Moving and changing and running like a corner. He needs no endorsement from me.”

Miller was the second overall pick of the 2011 NFL Draft, one pick after Cam Newton went first to the Carolina Panthers. Since, Miller’s been one of the league’s top threats off the edge. This offseason, he cashed in with a six-year deal worth up to $120 million, though in reality, it could function more like a two-year contract. While he’s nearing his mid-30s, Miller has managed to retain his athleticism while improving his football IQ.

“We talk about his talents often but this guy’s a scientist. He works at his craft. He encourages, trains others to do so who are like him. The EDGE Rush Summit that he’s a critical component of, I got a lot of respect for.”

Miller has been among the league’s most technical pass rushers helping to popularize moves like the “ghost” move, faking a long-arm rush and then turning and bending the corner without making contact.

It’s a move that current Steelers like T.J. Watt and Alex Highsmith now have in their toolbelt. While Miller has never been a Steeler, Mike Tomlin had the chance to coach him during the 2018 Pro Bowl, watching him work up close as Miller helped the AFC beat the NFC 24-23. Miller sealed victory with a strip-sack-fumble on QB Jared Goff. On paper, it was a meaningless game but it boosted the wallets of everyone playing for the AFC.

It was a $32,000 sack/fumble. Winners of the Pro Bowl that year received $64,000 while losers received just half that, $32,000. So consider Tomlin a fan of Miller. At least until this Sunday. Then he’ll have to figure out a way to stop him.