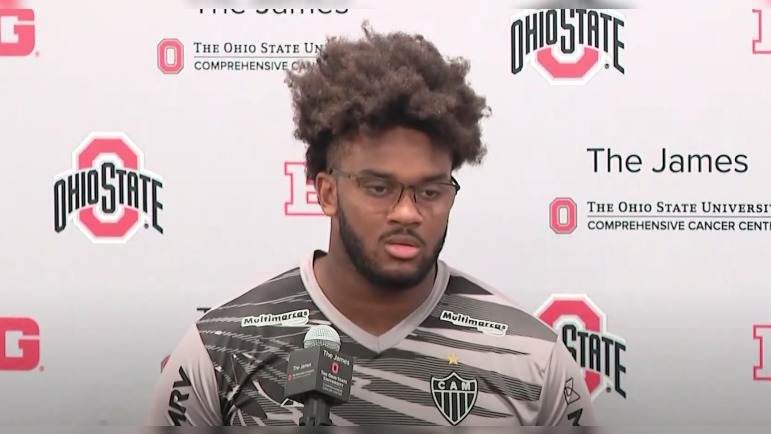 The Ohio State Buckeyes went into a hostile environment and came out the victors Sunday afternoon, defeating Penn State 44-31. The defense came up big for the Buckeyes, but the offense capitalized on the turnovers given to them. OT #77 Paris Johnson Jr. and OT #79 Dawand Jones were two of the players I highlighted this week prior to the game to see how they would handle an athletic, aggressive Nittnay Lion defensive front.

From the TV tape, Johnson represented himself well both in pass protection as well as in the running game for Ohio State, keeping the pocket clean while also generating a strong push in the running game. However, I wanted to do a deep dive into the talented blocker’s tape again to point out exactly what he did well as some “slip ups” he had throughout the game that he needs to work on.

Paris Johnson Jr. is in his first season at LT for the Buckeyes after starting last season at RG. Standing at 6’6, 310lb and having positional versatility, Johnson was quickly highlighted as one of the better OT prospects in this draft class before the 2022 season began, having good athleticism and length paired with the room for further development at the next level.

When you turn on the tape, you see Johnson’s experience at guard pay off on the edge at tackle, especially in the run game. Johnson is an aggressive run blocker that plays with a motor as he tries to displace his opponent off the LOS and finish him at the end of the play. Here is one example at the beginning of the game where Johnson takes the edge defender for a ride backwards, beating him into submission and finishing on top for the pancake block as he springs the runner into the second level.

Johnson is an effective down blocker, having the arm length and awareness to not let defenders cross his face inside. On the first clip, we see Johnson swing the DE inside as he attempts to crash inside, tossing him to the ground and finishing on top on the screen pass. On the second clip, we see Johnson execute a down block on the three-technique, walling the entire DL down on the cutback run to the left, allowing #32 TreVeyon Henderson to run untouched into the end zone for the score.

Johnson takes a similar approach when in pass protection in terms of finding ways to use his opponent’s momentum and body position against him. On this pass rep, we watch Johnson allow the defender to rush up the field, picking up before he can get to #7 C.J. Stroud in the pocket. Johnson keeps the defender from turning the corner and proceeds to plant him into the ground for another takedown block as Stroud finds his receiver down the sideline for the first down.

Here’s a similar example on the draw play from the shotgun where the OLB attempts to get the corner on the blitz, but Johnson is ready. He meets the blitzer at the LOS and uses his momentum against him as the defender fails to turn the corner to impact the play and Johnson finishes him off with another pancake block.

When it comes to straight pass protection, Johnson plays with active hands and can reset his feet and anchor in against the rush. Watch this rep here where Johnson quick sets the defender and gets hands-on him shortly after the snap, playing with some questionable footwork at the beginning of the rep, but settles in, digs his heels into the ground, and gets extended by his torso to stall the rush as Stroud completes the pass.

However, one tendency that continued to pop up in Johnson’s tape against the Nittnay Lions is balance issues and inconsistent footwork. There were several occasions that popped on tape where Johnson would fall off blocks due to not having his feet underneath him or simply having his feet stall mid-rep. Here are a couple of examples of Johnson ending up on the ground due to inconsistent footwork and a lack of base in both pass protection as well as in the running game.

Overall, it was a solid showing by Paris Johnson Jr. who has played himself into the first-round conversation thus far thanks to a successful move to the outside in 2022. His length, play demeanor, and awareness as a blocker make him a desirable prospect for offensive coaching staffs thanks to his well-rounded skill set as well as the upside that he brings to the table.

Johnson needs to add more strength and functional mass to his lower half to better anchor in against pass rushers as well as generate more of a consistent push in the running game. On top of this, his footwork is his biggest issue that needs to be addresses in terms of having a more fluid mirror in pass pro as well as not getting too narrow and upright in his stance to cause balance issues.

A better run blocker than pass protector at the moment, Paris Johnson Jr. has the tools to become a quality starting tackle in the league, but also shouldn’t be seen as a finished product. While many may look at him as a top 15 prospect, I see him personally more as a mid-to-late Day One prospect that would benefit going early Day Two to allow him to have time to develop and get stronger before being thrust out there before he is ready to go against NFL-caliber edge rushers.