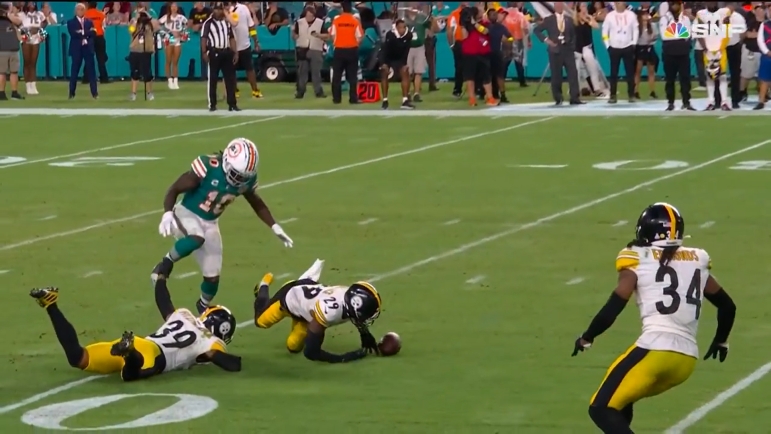 DL Cam Heyward spoke to the media Thursday addressing the upcoming matchup with the Philadelphia Eagles this weekend. Heyward spoke about the changes of defending a mobile QB like Jalen Hurts as well as how T.J. Watt’s eventual return can help this unit.

When asked about the need to come up with more turnovers after last Sunday’s game in Miami, Heyward said there are three key areas the defense can focus on in terms of generating the takeaways they need for splash plays on defense.

“There are so many different ways,” Heyward said to the media Thursday in the locker room on video from Steelers.com. “Catch the balls we’re supposed to catch. Get the sacks we’re supposed to get. When we do get the sacks, strip the ball. And then the running backs, you got to lay the wood and you got to make sure you punch the ball out. Those are three different ways we can get turnovers. I know we’re playing an opponent that’s only turned the ball over twice in six games. So, we got our work cut out for it, but we got to make sure we take advantage of those opportunities.”

The Steelers racked up seven sacks and five turnovers in their thrilling win Week 1 against the Cincinnati Bengals, but since have struggled to produce any splash plays after losing T.J. Watt to a pec injury in that game. In the six games they have played since that splash performance, Pittsburgh has totaled five sacks, four INTs, and two forced fumbles. In their last game against the Miami Dolphins on Sunday night, the Steelers dropped four potential INTs, a key point that HC Mike Tomlin referenced after the game as well as on Tuesday during his press conference, stating that the Dolphins capitalized on their turnover opportunities while the Steelers didn’t.

Tomlin Tips His Cap To Dolphins For Doing What They Couldn’t: ‘They Made The Necessary Plays To Secure Victory And We Didn’t’

It’s no secret that this defense has struggled to generate any sort of pressure on the QB or come up with splash plays since losing Watt. Heyward recognizes that as he himself hasn’t been playing to the level we have come to expect from him, having two sacks and four TFLs thus far in 2022 when he had ten sacks and 15 TFLs in what would be a first team All-Pro year last season. Still, he and the rest of the Steelers defense can’t afford to wallow in their adversity, but rather attempt to rise to the occasion.

They are up for a daunting task to get things turned around this week against an Eagles offense that has only given the football away two times prior to the team’s bye week last week like Heyward mentioned. QB Jalen Hurts is playing at an MVP-caliber level, showing signs of improvement as a passer while also being a deadly runner. Factor in that the Eagles have one of the best offensive lines in football as well as a host of weapons like A.J. Brown, DeVonta Smith, and Dallas Goedert for Hurts to throw to, Heyward and the rest of the defense may again have a tough time generating splash plays come Sunday.