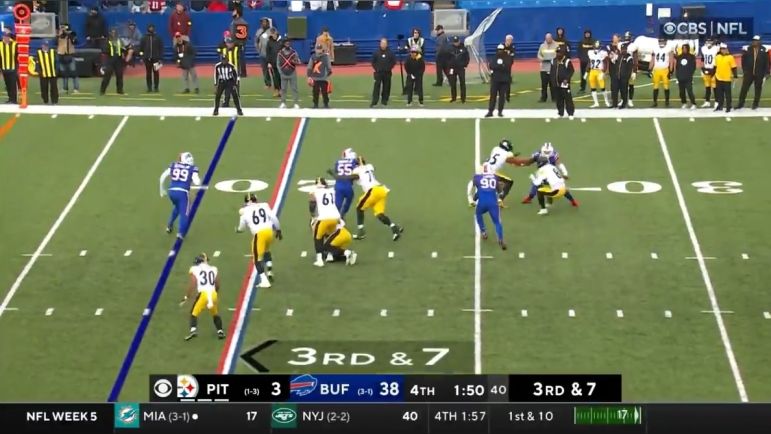 Breaking down the three sacks the Pittsburgh Steelers allowed in Sunday’s loss to the Buffalo Bills.

I don’t even categorize blockers/rushers here because of the nature of the play, a playaction rollout to the right. If you want to sum up the state of the Steelers’ offense, it’s this one. I don’t even know where to begin. A mess of a play through and through. George Pickens is supposed to come under the line on a split flow action into the flat, he’s probably the primary receiver, but he gets caught up in the line and is knocked off his path. Chase Claypool – I guess – is supposed to crack down and then spin out as a secondary option on a curl. Diontae Johnson runs the corner while the tight end comes across backside.

It…does not work that way. Just a cluster you-know-what and Kenny Pickett has nothing available to him. He’s chased and runs out of bounds. A mess of an execution though I’ll mention Pickett, like Trubisky early in the season, should’ve just thrown the ball away. Don’t eat the three-yard loss. Turns a would-be 3rd and 3 into 3rd and 6 and the Steelers throw incomplete, setting up 4th down.

I guess the playcall in theory wasn’t terrible. The execution was just a total eyesore. It’s hard to put blame when everything goes this poorly. I’m going to put half on Pickett for making a bad situation worse by not throwing the football away and half on Canada just because this offense at large is so poorly run.

Blame: Half on Kenny Pickett, half on Matt Canada

One of the seven three-vertical concepts Canada called on first down. But our focus here is on LT Dan Moore Jr. Treated to the full Von Miller experience. Miller’s flying off the ball here and Moore is late out of his stance. He hasn’t even taken a step as Miller is exploding off the line. 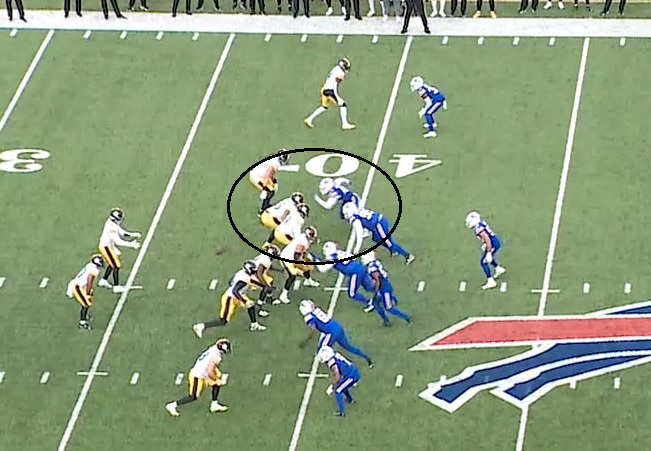 Gentry’s chip is ineffective too and Miller runs the hoop on his way to Pickett. Easy sack in a very short amount of time. Nothing really open for Pickett, the vertical releases take time and the check/release need time too so he’s pretty much forced to take the sack. Center Mason Cole is also beat on a swim move here and doesn’t allow Pickett to step up into the pocket. So he’s not absolved here either. I don’t think Cole is healthy, not even close, but that doesn’t mean he can’t/won’t get blame here.

Blame: Half on Dan Moore Jr., half on Mason Cole

Kenny Pickett takes “running into a sack” to a whole new, literal level. Feeling some pressure, Pickett rolls to his right. With his eyes downfield, he never realizes he’s running into RDE A.J. Epenesa, who was sealed upfield by LT Dan Moore. Pickett doesn’t see him until it’s too late and he’s wrapped up for the sack near the end of the game. One of those rookie moments you’ll look back and laugh about. Hopefully.