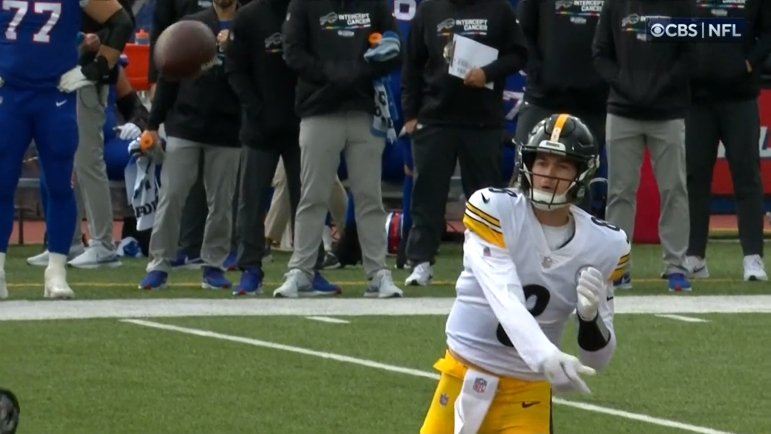 Kenny Pickett’s first start didn’t go as planned, with the Steelers getting blown out 38-3 against the Bills. Let’s take a look at how some of the rookies fared in Sunday’s game.

Pickett moved the ball well, with the team having a season-high four trips to the red zone. They couldn’t get on the board though, and the lack of red zone efficiency was one of the major negatives. His interception was a bad throw with him trying to take a shot at the end of the half to Diontae Johnson that was a little bit underthrown.

Pickett battled under tough circumstances, and while the Steelers don’t want to get in the habit of having him throw 50+ times a game, he had an efficient 65% completion percentage and took some one-on-one shots, which is a positive. Going up against the Bills’ defense, even one that’s as banged up as they were on Sunday, is no easy task. Pickett wasn’t perfect, but there was a noticeable improvement in the offense with him under center, even if the scoreboard doesn’t reflect it.

Pickens led the team in receiving for the second week in a row, although he was third on the team in targets behind Diontae Johnson and Chase Claypool. He made some nice catches on the sideline and showed off his contested catch ability with a nice grab over Kaiir Elam and he almost made another spectacular catch for a first down but it was ruled incomplete. His route tree wasn’t as diverse as last week, but he did run a good bit of curls and comeback routes in addition to his usual go routes and fade routes.

He also showcased his physicality, blowing a receiver back off the line of scrimmage. All in all, it was another impressive outing for the rookie.

For more on Pickens, be sure to check out Jonathan Heitritter’s Film Room

While Leal only had the one tackle, his two pass deflections against Josh Allen stood out. He ha a very high motor and he played all over the field on Sunday. The team has used him in a hybrid role with T.J. Watt out, and he’s logged snaps at both defensive end, outside linebacker, and a few as an inside linebacker. His one tackle was a combined one with Devin Bush on an 8-yard run by Devin Singletary in the first quarter.

Heyward had the first two catches of his NFL career, both coming in garbage time after Pat Freiermuth left the game with an injury. He did his job well blocking on special teams, and with both Freiermuth and Zach Gentry currently dealing with injuries, there’s a chance we see more of Heyward in the future.

Warren out-snapped Najee Harris 38 to 37 on offense and took over as the team’s 3rd down back. 22 of his snaps came in the fourth quarter with the game out of hand, but he also led the team in rushing with 24 yards compared to 20 for Harris. Warren’s blocking ability led to him getting the 3rd down-back role, and his 4 receptions were also a season-high. Warren has been a very pleasant surprise this season, and if he produces the way he did on Sunday, he’ll keep earning opportunities.