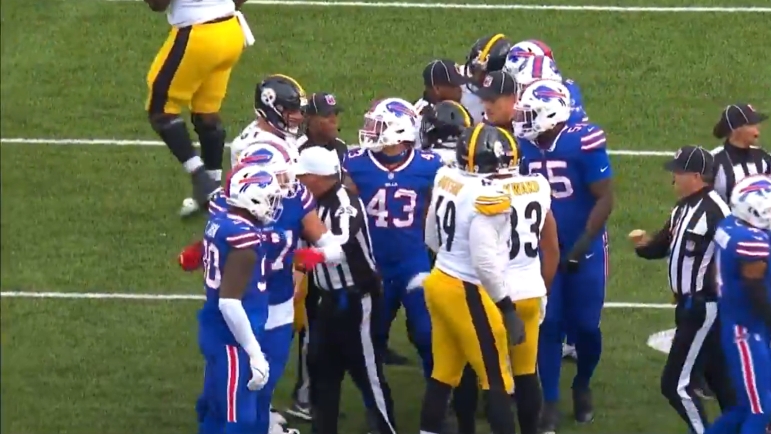 There were multiple unsportsmanlike conduct fouls handed out during Sunday’s game between the Pittsburgh Steelers and the Buffalo Bills. Only one of them resulted in a player being ejected from the game, with Bills pass rusher A.J. Espenesa receiving that distinction.

According to Tom Pelissero, however, there is no expectation that the third-year veteran could possibly receive a suspension for his actions during the game, even though the ejection came in the very late stages of the fourth quarter.

#Bills LB A.J. Epenesa, who was ejected Sunday for contacting referee John Hussey, isn’t expected to be suspended, I’m told. It’ll be reviewed for a possible fine, along with the rest of the incidents late in that game against the #Steelers.

Following a 4th-and-14 play with 1:07 to play during which Steelers quarterback Kenny Pickett threw the ball away, Espenesa was among the many players from both benches gathered within a scrum. The linebacker made contact with—elbowed—one of the game officials, which prompted the immediate ejection.

Pelissero notes that the incident will be reviewed for consideration for a potential fine, even if he is not suspended. Generally, if a player is ejected during the course of a game, he is less likely to receive a subsequent suspension if the infraction occurred earlier in the game rather than later.

Espenesa was guiding teammate Shaq Lawson away from the gathering of players when the official began to put his hands on the linebacker in order to try to clear the area. That is when he brusquely torqued his body and used his elbow to shove off the intrusion, jerking the official’s arm forward. It is not clear if he knew it was an official.

Whether or not he knew it was an official perhaps plays a role in the decision to suspend him or not, and watching the replay, one can certainly make the case that he may not have. As it is, Espenesa will be no worse for wear, minus a fine, for the incident, as the Bills’ offense ran out the clock just as his unit was coming off the field anyway.

The former second-round draft pick had just recorded a sack on the play before to force the long fourth down, a loss of eight yards. It was his only tackle of the game, but he also had a batted pass. A reserve, he came into the game with four tackles on the season and a sack and a half.