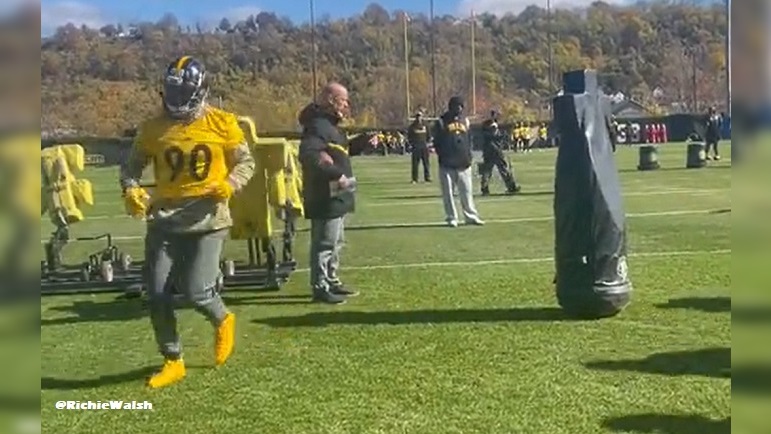 Is there a chance we could see Pittsburgh Steelers outside linebacker T.J. Watt return as early as Sunday against the Philadelphia Eagles? While I don’t know for sure, it certainly sounds like there’s at least some shot of that happening.

On Wednesday, the Steelers opened Watt’s 21-day practice window as a designated-to-return player, and on Thursday, a few of his defensive teammates were asked about the possibility of the outside linebacker playing on Sunday against the Eagles.

“I don’t know,” fellow outside linebacker Alex Highsmith said of Watt’s chances on Thursday, according to Jeff Hathhorn of 93.7 The Fan. “They’re working him back. We’ll see. I know that’s something the trainers are taking about with him. I’m just excited to see how much he’s progressed and gotten back to himself. We’re excited to see him, when he does return.”

Watt, who suffered a pectoral injury back in Week 1, has been sidelined since that contest. While sidelined, the NFL’s 2021 Defensive Player of the Year underwent a minor surgical procedure on one of his knees, likely the one that he injured during the preseason. After having that knee procedure done, the speculation became heavy that Watt’s return to the field wouldn’t happen until Week 10, the week after the team’s bye.

Steelers defensive end Chris Wormley was also asked on Thursday about Watt possibly playing on Sunday against the Eagles.

“That’s up to Mike [Tomlin] and him, and how he’s feeling,” Wormley reportedly said on Thursday about Watt’s Week 8 Sunday status. “But it’s exciting to see him out there and get some reps today.”

Normally, you don’t see players get activated back to the 53-man roster just days after their 21-day window has been opened. Watt, however, is far from normal. If any player can get back on the field just a few days after his 21-day practice has been opened, it’s him.

With a 2-5 record right now, the Steelers really need to start stacking wins if they want a shot at making the playoffs, and it certainly would be a huge momentum boost if they went into their bye week following a win over the Eagles, the NFL’s lone unbeaten team entering Week 8. The Steelers, by the way, are 1-9 in games that Watt hasn’t played in so far during his career, and they only have one win without him this season.

For whatever it’s worth, Watt is supposedly scheduled to talk to the media on Friday, and that’s rare for a player still technically on the Reserve/Injured list to do. You can bet he’ll be asked about the prospects of him playing on Sunday when he does hold his question and answer session.

If Watt were to return to action on Sunday against the Eagles, he would likely be on a limited snap count, especially with him just returning to practice this week. Should Watt not spill the beans on Friday, we’ll know for sure by Saturday at 4:00 p.m. ET if the plan is for him to play on Sunday, because that’s the deadline for him to be activated to the 53-man roster from the Reserve/Injured list if he’s going to play against the Eagles.

Stay tuned as maybe we’ll have some great news to pass along on Watt either Friday or Saturday.