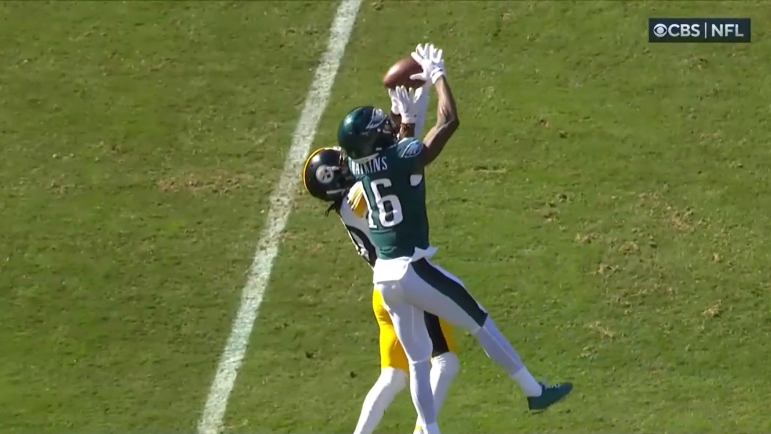 The Pittsburgh Steelers suffered yet another loss to the Philadelphia Eagles, dropping to a woeful 2-6 record going into the bye week. Both sides of the ball left quite a bit to be desired, and the team will have much to improve on in the bye week. On the defensive side, the secondary struggled immensely in pass coverage, allowing quarterback Jalen Hurts four touchdowns and a 140.6 passer rating. As such, Doug Kyed of Pro Football Focus highlighted two players on the Steelers’ secondary in his “one up, one down” series on Monday.

“In a game in which Pittsburgh let up 308 passing yards and four touchdowns,” Kyed said in reference to Steelers’ cornerback Cameron Sutton, whose stock he argued went up after this game. “Sutton was barely involved. He allowed one catch on three targets for 14 yards with a forced incompletion.”

“Edmunds, however,” Kyed said in reference to Steelers’ safety Terrell Edmunds, whose stock he argued went up after this game. “Let up a team-high 102 yards on five catches and six targets, including two touchdowns.”

For Sutton, there was a reason he was targeted only three times, as the Eagles found a weak spot in fellow corner Ahkello Witherspoon. Indeed, Witherspoon was targeted seven times for six completions, 83 yards, and two touchdowns, as the Eagles found a clear mismatch in their favor with receiver A.J. Brown being matched up against the Steelers’ corner. This is not to take away anything from Sutton, who had a 76.7 coverage grade on the game and is arguably the team’s most consistent cornerback this season.

On the other hand, Edmunds had a poor showing in what has been one of his better seasons, earning an abysmal 43.0 PFF coverage grade. The former Steelers’ first-round pick indeed allowed a team-high in yards, and was in coverage for two of Hurts’ four long touchdowns. This showing was rather uncharacteristic for Edmunds, who had a strong showing two weeks ago against the Tampa Bay Buccaneers, where he was the only starter left standing in the secondary and led the winning effort. However, he was unable to remain consistent, and had a poor showing at a bad time.

Keep in mind, this Steelers’ defense and secondary were coming off two strong outings against two talented offenses. The defense held the Miami Dolphins’ offense that features a receiving core including Tyreek Hill and Jaylen Waddle to one touchdown and no points in the second quarter, and secured a winning defensive effort against quarterback Tom Brady while riddled with injuries.

This time around, the team faced a strong offensive line and one of the league’s best passers this season. For the Steelers’ pass rush, a unit that played its seventh straight game without star linebacker T.J. Watt, the struggles were apparent, and they provided no help for the secondary. In essence, the Steelers had seven sacks in Week 1 with Watt playing the majority of the game. In the seven games since, they have eight sacks, only recently surpassing their Week 1 total.

The Steelers’ defense is now preparing for the big reinforcement of the post-bye week return of Watt. If Watt is any approximation of his healthy self, expect this unit to look different, and expect the jobs of Sutton, Edmunds, and the secondary to be considerably easier.