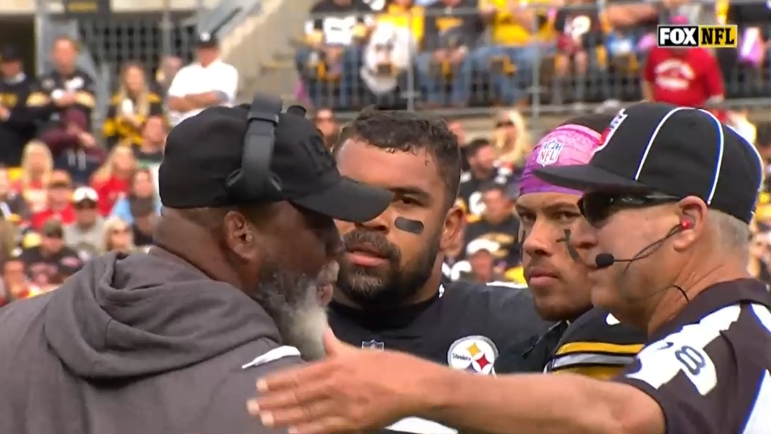 You can segment the Pittsburgh Steelers’ defense into two parts. A secondary that had to keep things simple, depleted by injuries, with multiple players called up from the practice squad asked to log significant time Sunday. Pittsburgh’s front seven was stronger and healthier and allowed them to be the less predictable portion of the defense, showing Tom Brady and the Tampa Bay Buccaneers’ offense plenty of different looks.

Speaking to reporters after the game, Cam Heyward said being multiple up front was key to slowing down the Bucs’ attack.

“We stemmed the front a lot,” he said via the team’s YouTube channel. “Moved things around. Never just became sitting ducks. I just thought we were ready for every situation. Playing Brady, you always think about those sneaks he’s had. I feel like I kept telling our guys, ‘be ready for the sneak, be ready for the sneak.’ And then we finally got it at the end.”

Pittsburgh rebuffed a Brady sneak in the fourth quarter, stuffing him on 3rd and 1. Brady is one of the best “sneak” quarterbacks ever and has burned the Steelers over the years. But Pittsburgh tightened up the “A” gaps, eliminated the bubble, and forced Tampa Bay to do something else. It was the theme of the day, Pittsburgh battling and focusing on what they had, not what they didn’t.

While we’ll have to go through our defensive charting, the Steelers continued to be busy and active with their front seven. Their 3-4 over front was an effective package, matching d-linemen on tight ends, and containing and controlling Leonard Fournette and the Bucs’ run game. Pittsburgh stayed with its 3-3-5 to match run and pass game personnel, though they did it more traditionally without DeMarvin Leal as a standup outside linebacker. The team also heavily relied on its three inside linebacker package of Robert Spillane, Myles Jack, and Devin Bush being on the field at once. Spillane was the rover, lining up all over the field, and praised by Mike Tomlin after the game.

“Robert Spillane, I thought was critical today in terms of us being able to do things because he played positions other than inside linebacker,” Tomlin said after the win.

After being torched for 38 points in basically three quarters last week, Pittsburgh played as well as they ever have against Brady. He finished the day just 25/40 for 243 yards and one touchdown, hit five times, and sacked twice. Tampa Bay was forced to kick field goals, four of them, going just 1/4 in the red zone. Running back Leonard Fournette, whose run over the Steelers in the past, was held to exactly three yards per carry.

Story is rightfully on the Steelers' defense stopping Tom Brady. But how about battling against Leonard Fournette. He's always had success against Pittsburgh too. Career rushing totals of.

“I thought we did some really good things up front. Hopefully this is something we just can keep building on,” Heyward said.

We’ll likely have a film room or video breakdown on some of the specific things the Steelers did to keep the Bucs’ offense subdued. Pittsburgh will look to keep this success going into Week 7’s game against the Miami Dolphins, who should be getting back QB Tua Tagovailoa.