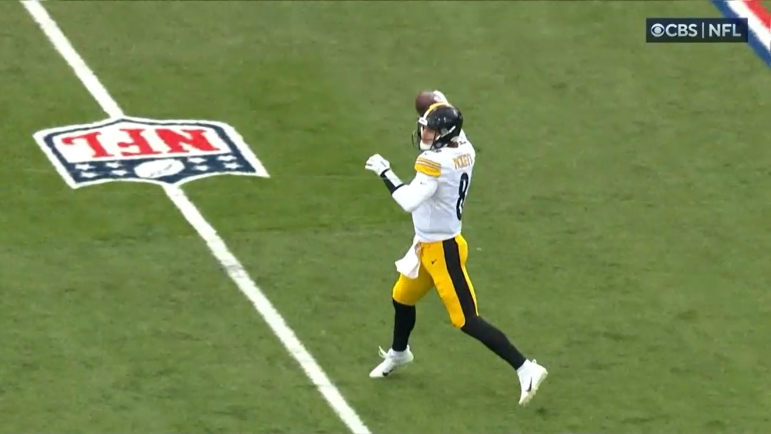 How do you evaluate an individual performance amid a catastrophic collective loss—especially in the heat of the moment, minutes after the game had ended? When it came time for Pittsburgh Steelers head coach Mike Tomlin to talk about the play of his rookie quarterback making his first start, he didn’t have much to say.

“I thought he was highly competitive, but I’m not dissecting it in this way as I stand here right now”, he told reporters during his post-game press conference, via the team’s website, when asked about first-round pick Kenny Pickett. “We got smashed, and that’s the only perspective that I have”.

While Pickett’s offense mustered just three points, coming on the opening drive, there is also the little matter of the defense giving up 38, including seven before Pickett ever got to touch the ball. It was already 31-3 by halftime.

By then, Pickett was 13-for-20 passing for 121 yards with one interception. He finished the game throwing 52 times, meaning that he put the ball in the air 32 times in the final 30 minutes, adding another 181 yards on 21 more completions. But with no points at all. For the entire team.

“It’s his first start, and so you’ve got to write a story, etc., but football is the ultimate team game”, Tomlin opined. “That’s why we all love it so much. That’s why we all respect it so much. And we got smashed as a collective today, so I don’t have a lot of individual analysis”.

Truthfully, I don’t imagine there will be many overly harsh evaluations of Pickett’s first game, because watching it, you can see that he was certainly not the biggest problem. When you lose this badly, the quarterback position is always a part of the problem, but we’ve seen worse performances in victories. The points just didn’t come—two missed field goals didn’t help.

The Steelers actually finished six of their 11 drives on the day well into Bills territory, in field goal range at the 30 or closer. Even if you take a basic field goal as a given, that would translate into 18 points there. But two of those possessions resulted in missed field goals (one was made).

The other three were turnovers on downs, all in the second half, including the opening drive, an eight-play, 48-yard effort spanning over four minutes that stalled just at the cusp of the red zone at the 20-yard line. They were actually on the 17 on second down when Pickett took a sack. He threw two incompletions on third and fourth down.

And as if it weren’t already over by then, it certainly was after that. His first start was a dismal failure, and yet he’s not fielding much of the blame for it. There’s a reason for that—he showed a lot of things to like, and to be encouraged by in the future—but this will be a game he’ll always want to forget and yet will always remember.