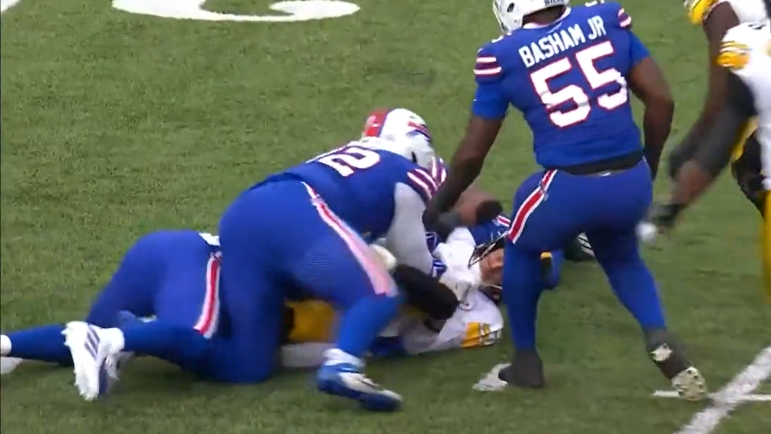 If you missed today’s games between Pittsburgh and Buffalo, the third play of the game was an indicator of things to come as Bills’ quarterback Josh Allen connected with wide receiver Gabe Davis for a 98-yard touchdown. Allen was seemingly untouched all game long as he continually found his receivers for chunk gains throughout the Pittsburgh secondary.

On the flip side, rookie QB Kenny Pickett found out just how difficult an NFL caliber defense is in his first start, as despite throwing for 327 yards, he held his own before the floodgates opened and Buffalo smothered the Steelers.

For veteran pass rusher Von Miller, it was nothing but business as usual but he was left impressed by the performance of the Steel Town rookie making his first start against arguably the best team leaguewide.

“Kenny he played well for his first start, they got him outta the pocket and he was extending plays and doing what he does,” Miller said via the Bills YouTube Channel.

Pickett got the baptism by fire treatment in his first start, and although his stats were underwhelming, it was a night and day difference from when Trubisky commanded the offense. However, several crucial drops on key downs, specifically by Pro Bowler Diontae Johnson, were not the difference in the game, but definitely noticeable by fans such as you and I.

The sledding doesn’t get any easier as next week the thorn in the side of the Steelers for years, Tom Brady, comes to town, boasting an overall regular season record of 9-3 against Pittsburgh.

For Pickett, it’s a chance to cut his teeth against perhaps the greatest QB to ever grip the pigskin. And for us casual fans, likely another game that sends the team on more of a downward spiral towards a top-10, or top-5 pick, in next year’s draft.

Personally, I’m a huge fan of Pickett and the game just wasn’t meant to be for his first career start. I do indeed believe much brighter things are ahead for him. Let me know your thoughts in the comments below. And perhaps the Bryan Bresee mock draft/Steelers links may come to fruition after all.