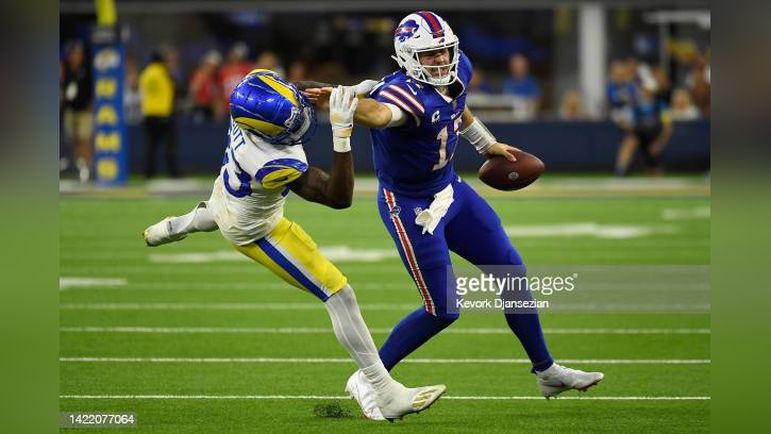 Undoubtedly, the Pittsburgh Steelers’ defense has their work cut out for them this Sunday when they travel to Buffalo to face the 3-1 Bills. Quarterback Josh Allen, the current favorite to take home the league’s MVP award, spearheads Buffalo’s offense who will be the toughest challenge the Steelers have faced this year.

This year, Allen is second in the league in passing yards, first in completions, and fourth in touchdowns through the air. However, as a complement to his passing prowess, Allen presents an equally difficult challenge of stopping him through the ground game. His 6’5, 237-pound frame coupled with speed and extreme toughness make for a dangerous runner in the open field. He’s fourth in rushing yards for a quarterback and has scored twice on the ground.

“It’s just like trying to tackle Lamar Jackson,” said Tomlin via the Steelers’ YouTube channel. “When you got that type of talent in the pocket at quarterback, it makes defense challenging.” Tomlin later joked that a key coaching technique to help with containing Allen would be to “build a fence,” or “utilize 12 or 13 guys.”

Pittsburgh’s defense has not been the juggernaut that many expected this year, and certainly have not looked the same since their dominant performance in Week 1 versus the Bengals. Many of their shortcomings can be accredited to the absence of star edge rusher T.J. Watt, who will still be on injured reserve for at least another week. Unfortunately, Watt may not be the only key defender inactive or dealing with injuries this week, as Minkah Fitzpatrick, Cam Heyward, Cam Sutton, Terrell Edmunds, and Akhello Witherspoon are all hurt at the moment, with Witherspoon being doubtful to play Sunday.

In the past three weeks, opposing quarterbacks have averaged a 57.8 QBR against the Steelers, which would be the 12th best rating this year when compared alongside individual quarterbacks. By any metric, Josh Allen is a far superior quarterback than the likes of Mac Jones, Jacoby Brissett, and Zach Wilson, who the Steelers have all struggled to contain. Given this, significant improvements will need to be made if they plan on heading into Buffalo and stealing a win.

“We got to be thoughtful about how we deploy our 11,” Tomlin said. “We’ve got to change some things up, we’ve got to keep them off balance,” explained Tomlin via the Steelers’ YouTube channel. “If we’re out of place, there’s going to consequences for it.”

Mike Tomlin enjoys showering opposing players with praise often, but it’s clear he has a special respect for Allen and recognizes him as one of the league’s elite talents. If Pittsburgh can get healthy, they will still need to have one of their best performances of the year if they’re going to stay competitive.