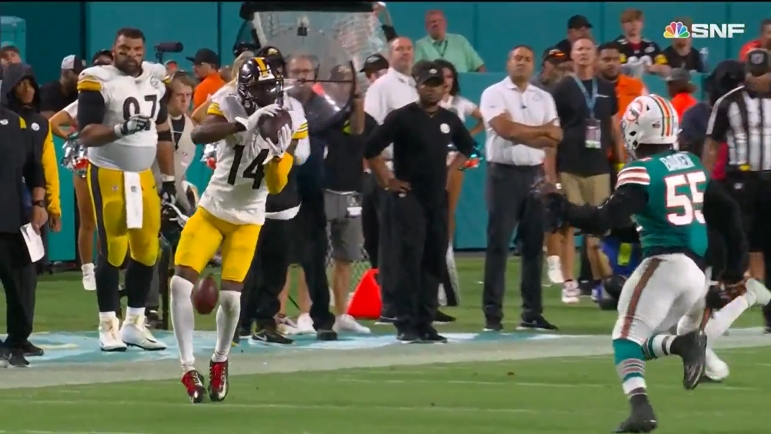 When Mike Tomlin was asked about WR George Pickens in his post-game press conference and whether or not the offense could look to feature him more after another strong effort, Tomlin mentioned that the choice to get Pittsburgh’s talented WR more involved isn’t always up to him.

“It just depends on what the contour of the coverage is, man,” Tomlin said to the media in his post-game press conference which aired live on the team’s YouTube channel. “We’re a collective. We got a group of capable playmakers and sometimes coverage in the contour, the coverage dictates where the ball goes. And so, I understand the nature of your question. That’s the type of questions you get when you lose. But we’re not focusing on answering them. We just focused on doing what’s required for us to win. We didn’t do enough of that today.”

Pickens caught all six of his targets on the night for 61 yards and yet another spectacular catch in the end zone where he managed to twill around on the back shoulder throw by Kenny Pickett and tap both feet in-bounds for his first NFL TD.

Pickens finished second on the team in receiving behind only TE Pat Freiermuth who was a targeted early and often by Pickett throughout the contest. Outside of a mediocre performance last week against Tampa Bay, Pickens has had a strong last three games including his outing tonight against the Dolphins as he posted six receptions of 83 yards against the Bills and six receptions for 102 yards against the Jets.

Pickens has showcased the talent of a WR1 in recent weeks, making combative catches look routine while in tight coverage. Still, Tomlin argues that coverage dictated that Pittsburgh veered away from Pickens at times in this game, likely when he was matched up against CB Xavien Howard. Still, Howard had been heavily picked on by opposing passing games prior to this game, ranking near the top of the league in catches and yards allowed.

While Tomlin may be right in saying that Pittsburgh has plenty of other capable playmakers in the passing game, it’s hard to deny that Pickens should be seeing more action in terms of targets. Pittsburgh went away from Pickens after the TD until 5:43 left in the fourth quarter, a stretch of time with the Steelers punted the ball five straight times on offense. He may be a rookie, but Pickens has shown he is ready for an elevated role in Pittsburgh’s offense and needs to be given opportunities to make those splash plays he has done throughout training camp, the preseason, and regular season to help Pittsburgh’s offense avoid stalling out for stretches of time