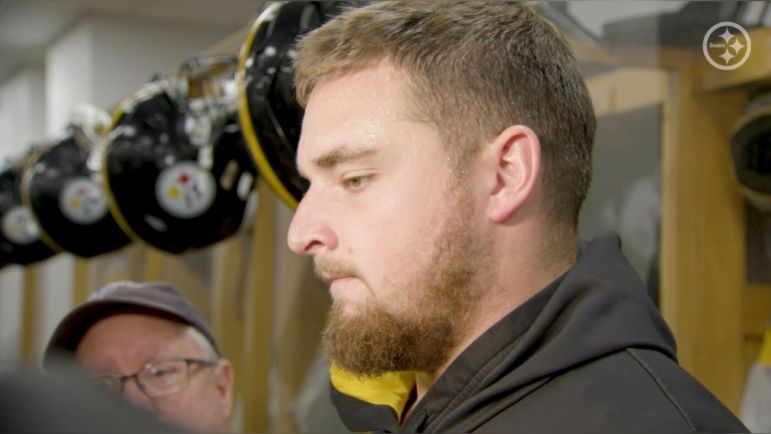 There is no quick or easy fix to the Pittsburgh Steelers’ run game. If there was, it would’ve been corrected by now. But Pittsburgh, for a fourth straight season, remains one of the NFL’s most lackluster ground attacks. And Mason Cole knows it’s an issue with plenty of roots. Speaking to reporters Monday, he said it’s an “all of the above” issue when trying to diagnose the problem.

“Sometimes defenses have the right call,” he explained via Steelers.com. “Sometimes we’re not blocking the right people, we’re missing blocks. Sometimes the hole is there and for whatever reason running backs miss it. I think it’s a combination of all three.”

On the season, Pittsburgh’s averaging just 4.0 yards per carry, a bottom-three mark in the league. They’re one of only three teams in football who don’t have a 20+ yard run, their season-long 19 yards set by Jaylen Warren yesterday. To sum up the state of the Steelers’ offense, their longest run is by an UDFA. Their longest pass was complete to a sixth-round rookie, TE Connor Heyward. With a woefully inefficient offense, the Steelers aren’t stringing together big runs, either.

Even some of the surface-level numbers don’t tell the whole story. On paper, it looks like Pittsburgh had a solid run game Sunday against the Eagles, going for 144 yards and six yards per carry. But those numbers are badly skewed thanks to garbage time stats and QB scrambles. Starting running back Najee Harris is averaging just 3.3 yards per carry, the lowest average of any RB this season with 100+ carries. Harris has even seen his rookie number of 3.9 yards per carry drop off, already a below-average number, as the Steelers haven’t found any consistency or identity on the ground.

“As a unit, running backs, offensive line, offense, we just gotta be better.”

As Cole says, the issues are multi-level and can’t be isolated to one thing. Pittsburgh’s o-line has had moments of serviceable run blocking, or at least generating decent first-level movement, though that’s gone away in recent weeks. Against the New York Jets, Miami Dolphins, and Sunday versus the Eagles, the line opened up very few holes while the game remained competitive. It’s why Jaylen Warren has shown to be the more effective runner with a downhill, bowling ball attitude that gets what little is blocked.

Pittsburgh will get its next crack to improve its run game in Week 10 when it plays host to the New Orleans Saints. Its run defense has been middle of the pack, allowing 4.5 yards per carry, but the Steelers have a host of issues they must fix before even considering their opponent.