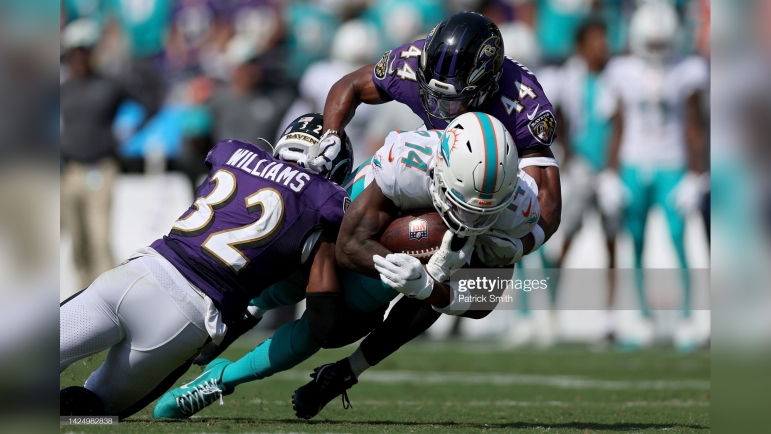 On paper at least, the Baltimore Ravens are supposed to have one of the most talented secondaries in the NFL. The unit is not getting the job done through the first month of the 2022 season, however. They have allowed more passing yardage than any team in the NFL so far, facing 177 pass attempts, giving up 114 completions for 1,261 yards. Their eight receiving touchdowns allowed also ranks 25th, even though they rank first in the league with seven interceptions.

“Shoot, we’re still trying to grow-up. We’re last”, All-Pro cornerback Marlon Humphrey told reporters yesterday, via transcript from the team’s website. “To look up there and be eating lunch and see 32nd, you’re just like…”

This is not unfamiliar territory for the Ravens, as they finished last in the league in passing yardage allowed last year, though they were decimated by injuries. Marcus Peters missed the entire year, Humphrey missed most the second half, and safety DeShon Elliott was injured in the first half of the season, as well.

Sunday’s loss to the Buffalo Bills was the team’s best yet in terms of passing defense, surrendering only 201 net yards. They gave up 297 in the opener to the New York Jets, 461 a week later to the Miami Dolphins, and 302 to the New England Patriots.

Overall, the Ravens rank 30 in overall defense and 23 in points allowed, sitting at a 2-2 record. Since allowing only nine points against the Jets in the opener, they have given up an average greater than 30 points per game in the three since. And the passing defense has been the biggest culprit.

“It’s great to see, because I like to stay humble, but we’re still trying to gel together, and we really want to get that 32nd down”, Humphrey said. “It’ll be a tough road, but I’m really excited for it, especially with this bunch coming in. We’ll definitely all have our hands full”.

Next on the agenda is the Cincinnati Bengals. While they have also struggled some to start the year, they boast some of the greatest passing talent in the league with quarterback Joe Burrow and the wide receiver trio of Ja’Marr Chase, Tee Higgins, and Tyler Boyd. They rank eighth in passing offense at the moment.

As far as passing defense goes, the only team that is all that close to the Ravens’ 315.3 yards allowed per game is the Dolphins, who have surrendered 299.3 yards per game, so they’ve got their work cut out for them to improve their ranking, but it’s a long season still.

And both Peters and Humphrey have been working their way back from last year’s injuries. Marcus Williams was a big addition in free agency who is still adjusting at safety. They already lost slot cornerback Kyle Fuller to injury, but have Brandon Stephens taking over that role.