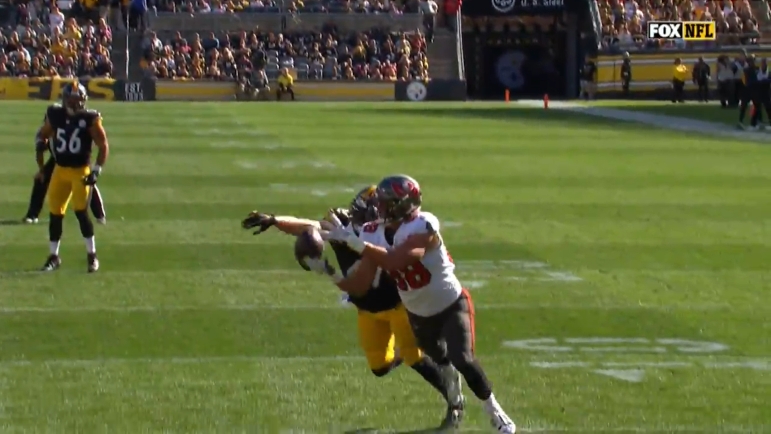 On Tuesday, HC Mike Tomlin spoke to the media in his weekly press conference, where he talked about the events of Sunday’s upset win against the Tampa Bay Buccaneers and previewed the team’s upcoming Week 7 matchup on the road Sunday night against the Miami Dolphins.

When asked about LB Robert Spillane and his role as a coverage linebacker against the Bucs, Tomlin said that he made use of the men at his disposal and played Spillane accordingly due to being down men in the secondary.

“In some instances, he was representing the nickel,” Tomlin said on Spillane Tuesday in his press conference, which aired live from the team’s YouTube channel. “In some instances, he was representing a down safety or a box safety. I live by the philosophy when you got red paint, you paint your barn red. You guys hear me make that cliche all the time. And what it means is if we have unusual depth at a position, then we need to create schematics to highlight that depth. If we’re thin at another position, we better create some schematics that minimize that lack of depth.”

Pittsburgh was ravaged in the secondary heading into Sunday’s matchup with the vaunted Buccaneers’ offense led by Tom Brady. The Steelers were without Minkah Fitzpatrick, Cam Sutton, Ahkello Witherspoon, and Levi Wallace on the back end and had the daunting task for covering Mike Evans, Chris Godwin, and the rest of the Tampa Bay passing attack. They promoted CBs Josh Jackson and Quincy Wilson as well as S Elijah Riley to play alongside Terrell Edmunds, James Pierre, and Arthur Maulet to try and defend against Brady, who had haunted Pittsburgh for the last two decades.

Since Spillane has been utilized as Pittsburgh’s nickel/dime backer when the defense has gone to sub-package football, he saw his role in coverage increase in this game. Overall, Spillane filled in admirably, but still struggled in coverage like he has throughout his NFL career as Tom Brady picked on him early and often.

Will always appreciate the compete level Robert Spillane brings. Fact remains that he's a massive liability on the field defensively though.

Against Tampa: allowed six catches on seven targets for 80 yards with a touchdown and five first downs. One incompletion forced.

Still, Spillane came up big with a key pass breakup on TE Cade Otton, which was the only target he didn’t allow a completion on in the game. While not the most athletic or twitchy athlete, Tomlin appreciates the willingness and effort Spillane plays with on a regular basis, even when it’s a disadvantageous position for the former UDFA linebacker.

Pittsburgh has often resorted to having linebackers cover slot receivers due to their defensive scheme over the years, which has led to plenty to plenty of bad matchups in coverage and easy completions. However, Tomlin and the staff don’t seem in any hurry to change that occurrence anytime soon, and despite being a bad matchup with the like of Chris Godwin, Tomlin can appreciate the way Spillane represented himself out there this Sunday.

Robert Spillane gets the honors on defense with a grade of 32.1 #Steelers #NFL https://t.co/f8sgLXC5NI

“And so, we were running short in the secondary,” Tomlin continued on Spillane. “We had all our regulars at inside linebacker. And so, in some instances through schematics, Robert was playing nickel. In some instances, he was playing box safety and his versatility and the depth of that position allowed that to happen and we’re appreciative of his contributions.”