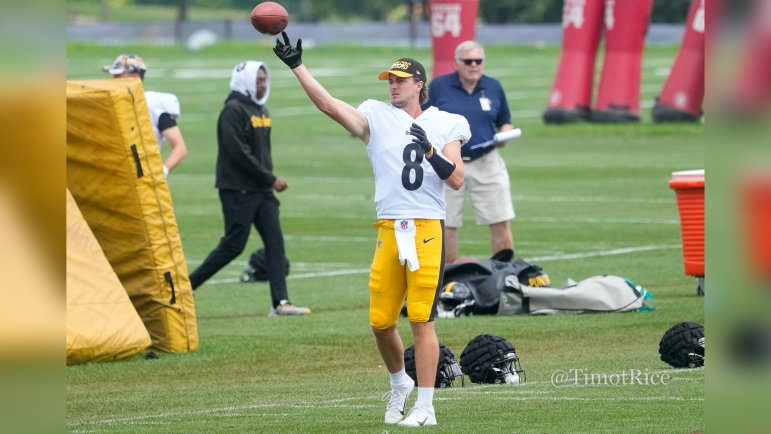 While the Pittsburgh Steelers are coming off a brutal loss to the New York Jets to drop to 1-3, one thing Steelers Nation is smiling about is first-round pick Kenny Pickett getting his first nod at the starting quarterback job. Pickett will start for the team on the road in their Week 5 outing against the Buffalo Bills. As he prepares for his first start, the rookie quarterback was asked about his teammates’ reactions to being named the starter in a Wednesday press conference after practice.

“Everyone treats everyone with a lot of respect here,” Pickett said when asked about his teammates’ reactions to him being named the starter. “Whether you’re a rookie or an undrafted guy, whatever it is, everyone really treats each other with a lot of respect. I think you have to earn that. It comes with work, it comes with what they’re seeing you do while you’re at the facility or on the practice field. It doesn’t happen overnight, so the veterans guidance and respect is something I want to continue to earn to help us win football games.”

Pickett had the chance to play with the starting lineup on several occasions during the preseason and training camp. In doing so, he earned the praise of several of the team’s veteran players. For instance, perhaps the team’s most established and respected veteran in defensive end Cameron Heyward recently praised the rookie for taking charge of the offense in the second half against the Jets. Pickett also received the praise of running back Najee Harris, receiver Diontae Johnson, among others.

Being drafted in the first round right after the retirement of 18-year Super Bowl Champion quarterback Ben Roethlisberger as the presumed heir comes with a lot of pressure, as does walking into that locker room. While it does not seem like much for Pickett to earn the praise of his veteran teammates, history suggests that this is crucial.

Take Washington quarterback Robert Griffin III, for example, whose attitude reportedly led to his own offensive line to dislike him, and ultimately a less-than-ideal career trajectory for a second overall pick. Another example is quarterback Josh Rosen, who was reportedly unlikeable as a teammate, and his career trajectory speaks to the detriments of a poor attitude.

The quarterback position commands leadership and a positive attitude. The prestige of being picked in the first round can easily and has led quarterbacks to their own detriment. While the verdict is still out and will be for a bit on Pickett’s merit as a quarterback, one thing that won’t sink him is character issues.