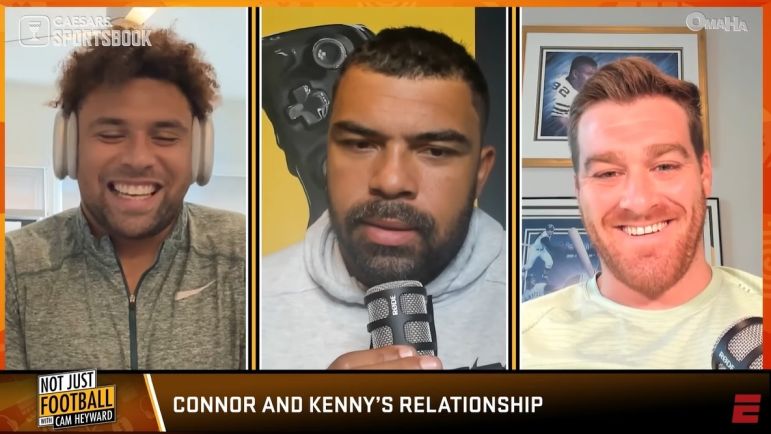 It’s rookie evaluating rookie but still, Connor Heyward can see leadership. Everyone on the field, rookie or veteran, can. And to Heyward, Kenny Pickett immediately showed off his leadership skills Sunday. Heyward joined older brother Cam on the most recent episode of Cam’s Not Just Football podcast and talked about Pickett’s mentality in his first regular season playing time.

“A guy like Kenny, he’s looking at you and expecting for you to be on the same page as him,” Connor said. “There was that one play where he wanted George, George got pressed, he wanted to run the fade. And George just ran the eight-yard hitch. And George knew what the right thing was but [Pickett] was like, ‘no, when you get that look, I want you to run the fade.’ Seeing him do that, grab George, confront him like that, ‘I want you do to this,’ that was really cool to see. Seeing him take charge. When you see a QB do that, it’s really cool to see.”

In a word, it’s all about communication. To be crystal clear on correcting any offensive mistakes, even if, as Heyward said, Pickens knew he ran the wrong route. Pickett taking charge to say that, not assume it, in an effort to be better for next time.

Heyward never makes it 100% clear that came in the Jets’ game but we can reasonably assume it did. I’ve tried to go back and find the clip and while I’m not certain, he may have been referring to this play that resulted in an ineligible man downfield  penalty.

Pickens isn’t facing press and isn’t running a hitch but there sure seems like some miscommunication on the play that led to the delayed throw and penalty.

Coming out of the draft, Pickett’s leadership wasn’t in question. A five-year player at Pitt, Pickett led the Panthers to an 11-win season in 2021. He was lauded for his leadership and command of the offense, traits he’s carried over to being in the NFL. In his debut against the Jets, Pickett showed command and control of the offense and was highly effective on possession downs, an area Mitch Trubisky and the offense struggled in over the first 3 1/2 games of the season.

Starting this weekend against the Bills, this is Pickett’s offense. He’ll need the whole team to play well to support him but for 2022 and beyond, it’s now Pickett’s team to take charge of.