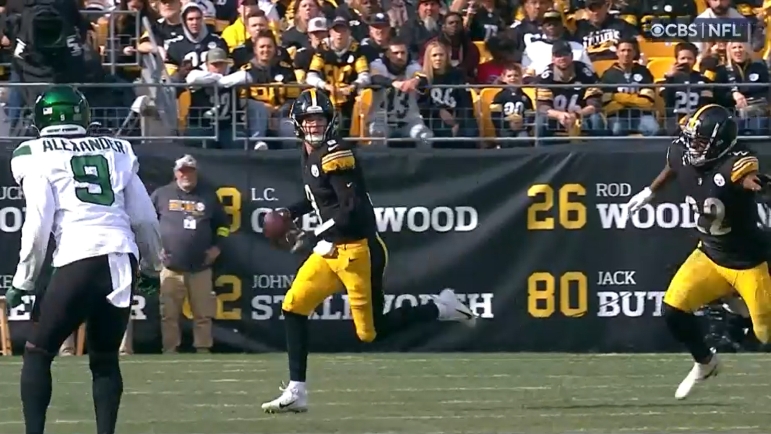 The Pittsburgh Steelers’ offense was much better in the second half during Sunday’s 24-20 loss to the New York Jets, after rookie quarterback Kenny Pickett replaced Mitch Trubisky. Guard James Daniels, who also played with Trubisky in Chicago, said there wasn’t any shift in playcalling, but the Steelers began executing plays better.

“We were running the same plays, I just thought we were executing them better,” Daniels said today, via Steelers.com.

It was clear that Pickett took command of the Steelers’ offense. While his first throw was an interception (although Chase Claypool probably should’ve caught it), Pickett bounced back and led two scoring drives, including a 12-play, 82-yard drive to put Pittsburgh up 20-10. Pickett was throwing the ball downfield a bit, with three completions of 10+ yards on that drive, and five total on the day, which means that half of his completions went for over ten yards. For an offense that’s struggled to move the ball, that’s a really positive sign.

Pickett’s three interceptions obviously aren’t a good look, and the second one was a throw he shouldn’t have made. But there’s no doubt that the offense looked better. Maybe they were feeding off the energy and momentum from the crowd, and you can’t definitively say Pickett is the better quarterback until he gets a full game under his belt. But it certainly seemed as if Pickett is a better fit to help this team win right now than Mitch Trubisky, and he’s certainly the better option when considering that he’s the quarterback of the future. He made his share of rookie mistakes, but the fact that he wasn’t afraid to push the ball and he looked comfortable using his legs (two touchdown runs and a key scramble on third down that gave the Steelers a new set of downs) is a good sign for this team going forward.

And at this point, even if they think Trubisky is currently the better quarterback, they’re still 1-3. They drafted Pickett to be the quarterback of the future, and with this season looking dead in the water, the future is now. Frankly, Pickett is probably better than Trubisky, but even if he struggles next week against Buffalo, they gotta stick with him and, barring injury, make him the starter for the rest of the season. He was thrown into the fire midgame without a ton of practice reps, and yet Daniels said the team executed better after Pickett came in. With a full week of preparation, things will probably look better, although a much better opponent in the Buffalo Bills awaits.

Three-and-a-half weeks of Mitch Trubisky netted the offense 53 points. Pickett can’t do much worse than that. Hopefully, the execution continues to be better with him under center, and this year Pickett shows enough promise that the future becomes exciting.