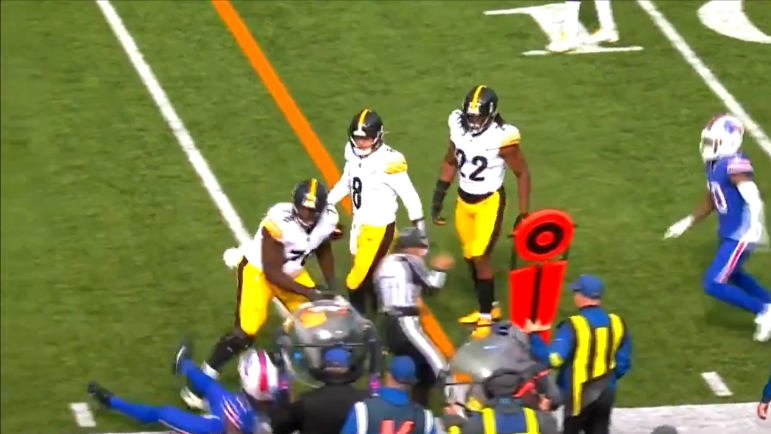 After a 38-3 defeat, there isn’t much to smile about. But you could manage a grin to see OG James Daniels stick up for Kenny Pickett after Bills’ DB Damar Hamlin hit a sliding Pickett late in the third quarter. Speaking to reporters after the game, Daniels discussed the moment, telling the PPG’s Brian Batko he was just sticking up for his franchise QB.

Steelers RG James Daniels on the play where he went after Damar Hamlin for hitting Kenny Pickett on a slide: “He’s our franchise QB. I’m shocked they didn’t throw the flag.” Says he knows there are other quarterbacks in the league who get a penalty called there.

Here’s a look at the slide, hit, and Daniels’ retaliation.

It’s not a hit to the head but the timing of it is certainly questionable, Hamlin flying in after Pickett already decided to slide. To Daniels and Steelers’ fans surprise, the officials opted against throwing a flag, and after huddling, called Hamlin’s action a legal play. Even the CBS referee/penalty analyst thought there should’ve been a flag.

Normally, refs err on the side of penalty when it comes to quarterback hits. Like Daniels told Batko, bigger-named quarterbacks around the league probably draw that call. The quarterback the Steelers are playing next week, Tom Brady, gets that call 99% of the time.

Daniels was the one flagged for unnecessary roughness, undoubtedly the correct call but one hard to be mad over. Defending and protecting your quarterback is the #1 rule of being an offensive linemen. For all other rules, see rule #1. Though more aggressively, Daniels’ hit reminds me David DeCaastro and Maurkice Pouncey sticking up for Ben Roethlisberger after an Eric Reid hit against Carolina years ago.

James Daniels sticking up for his QB. That's what Steelers' linemen do. https://t.co/H9TvrWuyzf

There’s no question those moments can be tough for a DB like Hamlin, having to judge a slide/no slide in an instant without the benefit of slow-mo replay like we have. He’s also watched his QB Josh Allen truck stick defenders and perhaps Pickett’s fake slide last year against Wake Forest weighed on Hamlin’s (a former Pitt Panther too) mind. After the game, Mike Tomlin said it best. It’s not about being angry at Hamlin, but it’s about being upset the officials deemed that a legal play.

But that moment is about the only thing that felt “good” about Sunday’s loss. And it’s hardly comfort to a Steelers team that sits 1-4 and looking as bleak as they have in two decades.