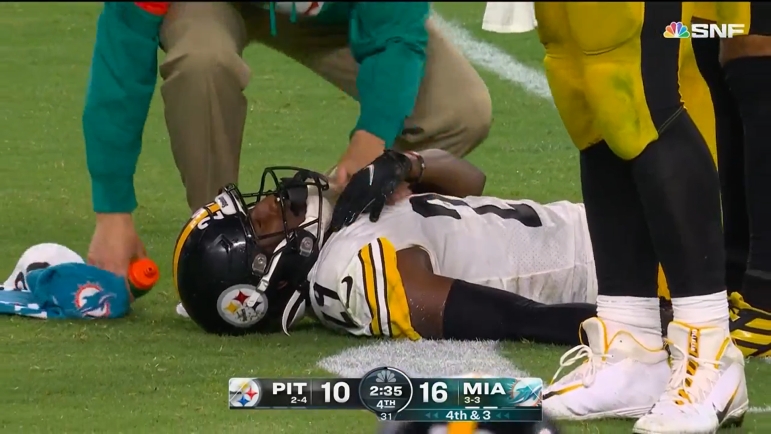 Cornerback Levi Wallace highlights the list of Pittsburgh Steelers’ injuries heading into their Week 8 game against the Philadelphia Eagles. Speaking during his weekly Tuesday press conference via the team’s YouTube channel, Mike Tomlin outlined the state of the Steelers’ health following Sunday night’s loss to the Miami Dolphins. The two key injuries he mentioned are:

“Levi Wallace is being evaluated for a shoulder,” Tomlin said. “His availability is in question. Josh Jackson has got a groin. I don’t know if his availability will be in question but it may affect his participation in the early portions of the week.”

Wallace suffered the injury late in the Dolphins’ loss on a third down breakup against QB Tua Tagovailoa, while Jackson played solely on special teams, logging just four total snaps there. Though healthier now, Pittsburgh’s secondary battled injuries for weeks, with Wallace and Jackson’s injuries being the most recent examples. Wallace also missed the team’s Week 6 game against the Tampa Bay Buccaneers with a concussion. Minkah Fitzpatrick and Cam Sutton returned for the Dolphins game, boosting the group overall. Tomlin did not mention CB Ahkello Witherspoon, who has been out since Week 3 with a hamstring injury.

Cornerback James Pierre started the Dolphins game and could remain in that role this weekend against the Eagles. Sutton played rotational snaps but could progress to a full-time role. If Witherspoon is able to return, he would be in the conversation to start, but he struggled when healthy and Pierre has earned a greater role in the Steelers’ defense.

As we noted earlier, Tomlin said he had no updates on OLB T.J. Watt or WR Calvin Austin III, but indicated neither is likely to be available this weekend. Austin must come off IR by tomorrow or else spend the rest of his rookie season on injured reserve.