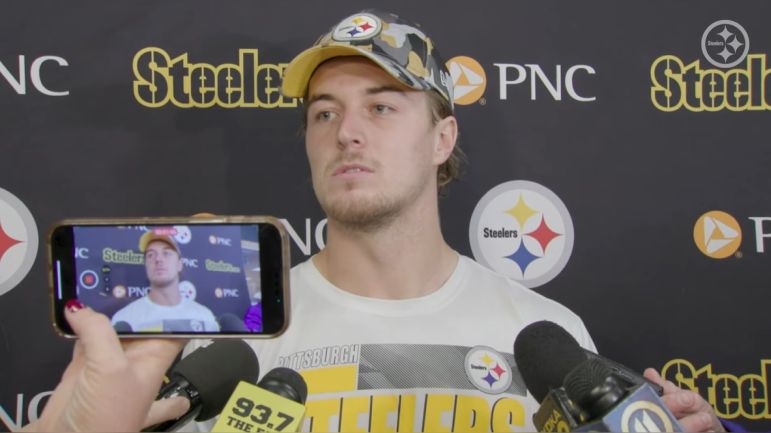 Like any rookie quarterback, Kenny Pickett is riding the wave of a roller coaster rookie season. Some good, some bad, all things to learn from. After a three interception performance against the Miami Dolphins, including picks on his final two drives, Pickett told reporters Wednesday he’s focused on not making the same mistake twice.

“I’m definitely learning,” he said via a team transcript. “I felt like there was a lot of good I did, and then there’s definitely some bad. It’s not going to be a smooth process. I’m in here working to get it right and I’ll definitely get it right and get us back on track here.”

Through four games and three starts, Pickett has a high completion percentage sitting at 68.5%. But his yards per attempt is one of the lowest in football while he’s thrown just two touchdowns to seven interceptions. Plenty has been placed on his shoulders, throwing the ball 52 and 44 times in the two full games he’s played in this season. A lack of a running game isn’t helpful to any quarterback, much less a rookie, though it doesn’t absolve him from the back-breaking plays at the end of the Dolphins’ game, especially the second that was snatched away by Dolphins’ safety Jevon Holland, a throw that was late for Diontae Johnson.

While Pickett was understandably pressing late in the game, he admitted he has to better pick and choose his spots, acknowledging he should’ve scrambled instead of passing on his final, game-ending INT.

“Looking back on it, I definitely wish I would have ran it,” Pickett said vowing that miscommunication with Johnson wouldn’t occur again.

For a rookie season, the goal should be to analyze Pickett’s play. Not conclude. Or else just as the Browns did with Baker Mayfield, fans will torture themselves trying to make snap decisions over Pickett’s future with the organization. While he must take better care of the football and while the offense must put more points on the board, 13 in the two full games he’s played, the rest of the season is about Pickett’s game progressing and him learning from the inevitable mistakes he’ll make. Not repeating mistakes is how players get better and unfortunately, that means there will be growing pains along the way.