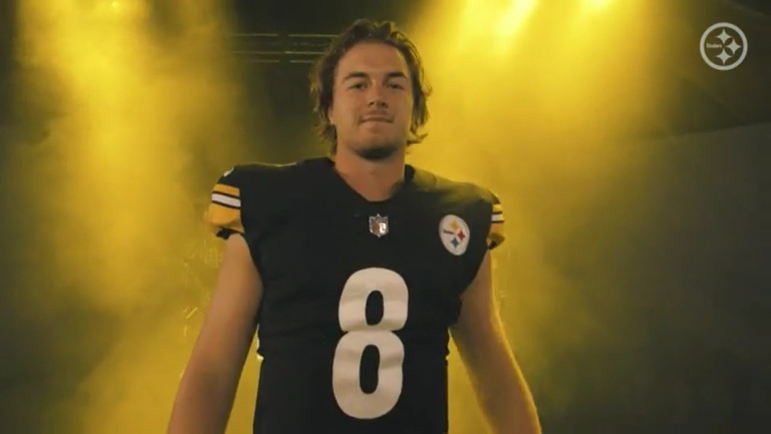 The Pittsburgh Steelers are facing the Tampa Bay Buccaneers in a critical Week 6 home matchup. Both sides of the ball have struggled for the Steelers, who are coming off a disparaging 38-3 loss to the Buffalo Bills to drop to 1-4. One thing to look forward to is rookie quarterback and 2022 first-round pick Kenny Pickett making his first home start at Acrisure Stadium, and will have an opportunity to prove himself as a capable starter. When asked about Pickett, Buccaneers’ co-defensive coordinator and longtime Steelers’ linebacker Larry Foote had high praise.

“He don’t look like a rookie,” Foote said when asked about the Steelers’ rookie quarterback on Thursday in a press conference on the team’s YouTube channel. “He looks solid. You can tell he can get the ball out of his hands. When his initial read is not there, he can get to plan B in a hurry. So, mainly when you watch quarterbacks, when they can do that, they can grow, they can process is what we like to say in this league. And he definitely has that.”

Foote is part of a long list of former Steelers that are currently involved with the Buccaneers, a list that includes former Steelers’ offensive coordinator Bruce Arians and former backup quarterback Byron Leftwich. With many years playing under former defensive coordinator Dick LeBeau’s zone blitz system, as well as a coaching career dating back to 2015 under the likes of Arians and current Tampa Bay head coach Todd Bowles, Foote has ample experience on NFL defenses.

As a relatively older rookie at 24 years old, Pickett had made several veteran-like decisions in his game and a half of playing time. The rookie began his pro career in the second half against the New York Jets, replacing starter Mitchell Trubisky. In doing so, his performance was up and down. While the three interceptions pop out on the stat sheet, an argument can be made that none of them were his fault, and his performance showed plenty of promise.

Pickett’s first start, while nowhere near enough to keep the game competitive against Buffalo, was certainly not a poor performance. Pickett earned a 65.8 PFF grade, which is by no means terrible given that he was playing down the majority of the game.

Foote provides an interesting take on Pickett’s trajectory. He implies that his foundation of being able to make the right decisions early in a quarterback’s career, as Pickett has so far, is a sign that they can progress and grow. One play that highlights Pickett’s ability to quickly shift to his second read came early in the second quarter against Buffalo. On this play, he shifted from his first read to receiver Chase Claypool’s deep crossing route due to an underneath linebacker, instead throwing to tight end Zach Gentry, a read that CBS commentator and former quarterback Tony Romo praised.

The verdict is still out, and will be for a bit with Pickett. He will have a chance to prove himself on Sunday, and a win against the heavily favored Buccaneers while outplaying quarterback Tom Brady would do just that.