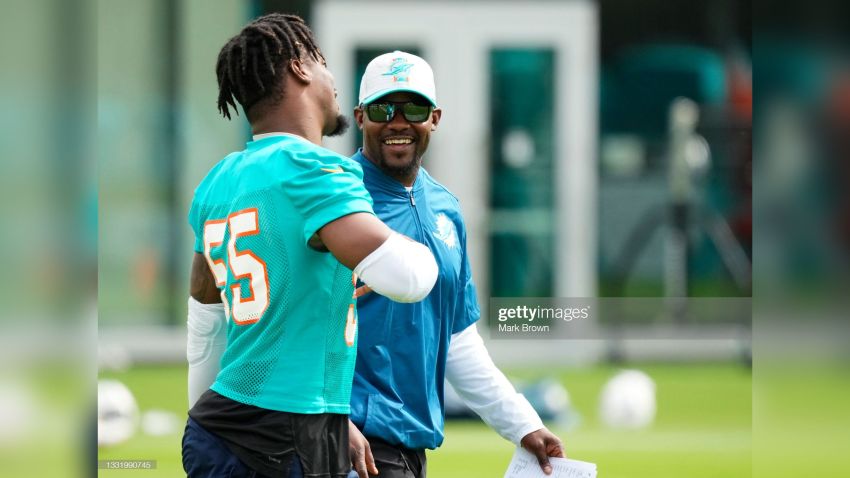 Although his firing earlier this offseason was met with near-universal surprise, there were reports of former Miami Dolphins head coach Brian Flores being something of a taskmaster when it came to managing his roster, which may not have been met favorably by everyone.

Returning to Miami for the first time since his firing, and while actively suing his former employer, we are certainly in an interesting position. Players on both sides of the fence—his current players with the Pittsburgh Steelers and his former players with the Dolphins—have had to field questions about it. Personally, I found Dolphins linebacker Jerome Baker’s answer most interesting, and perhaps most telling.

“One thing I’ll say about Coach Flo’ was he was always honest”, he told reporters on Thursday. He is pictured with Flores above. “That was the one thing that never changed. He didn’t care if he hurt your feelings. He didn’t care if it got under your skin a little bit. You knew the guy just wanted to be honest and he was going to tell you the truth and he wanted the best out of you”.

Now, comments like ‘he didn’t care if he hurt your feelings’ are obviously going to stick out. Perhaps it even suggests that he did hurt some feelings. After all, not every player responds to the same style of coaching. I’m sure Flores’ approach wasn’t what best fit everyone. But it worked for Baker.

“I always respect that just as a man”, he said of his former head coach. “He never lied. He never spared my feelings. He was honest and he just proved to me and showed me that he really cared and wanted the best for me. I always respected that”.

Baker played three seasons under Flores as head coach. Drafted in the third round in 2018 out of Ohio State, he spent three quarters of his career heading into the 2022 season learning from him and absorbing his coaching.

He emerged as a full-time starter in that period, registering 330 tackles over those three seasons with 19 tackles for loss, plus 14 sacks, five forced fumbles, two interceptions, and 11 passes defensed. In other words, statistically, he was very productive.

In fact, Flores’ defenses were widely acknowledged as overperforming during his tenure there, and he called his own plays on defense despite being the head coach. He may have a coaching style that doesn’t suit everybody, but at the end of the day, he got results. And for guys like Baker, who just want to be the best they can be and recognize that that’s what Flores was trying to get from him, all they can do is respect it.