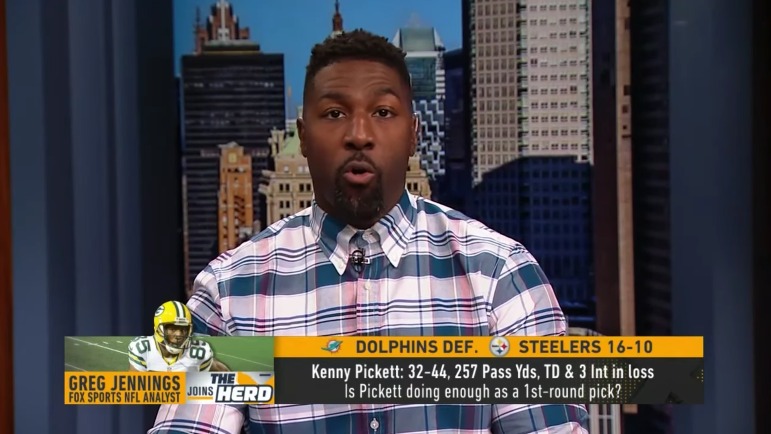 Former NFL wide receiver Greg Jennings appeared on The Herd with Colin Cowherd and talked about Kenny Pickett’s performance through three starts. Jennings said he thinks that Pickett is going to grow into a solid player, but that he needs to limit turnovers and put the team in a better position if he wants to succeed.

“This is obviously a year where he’s going to show us that he can grow and learn from this, or this is going to ruin his career. I believe the former rather than the latter,” Jennings said via the show’s YouTube channel. “He’s just making uncharacteristic decisions, he’s making decisions he can’t make. He can’t put the team in a bad position defensively and offensively, and that’s what you’re seeing him do. When they have a chance to make plays and just keep the ball in their possession, he has to find a way to do that,” he added.

Pickett was fine until the last few minutes of the game last night, when he threw two back-breaking interceptions with the Steelers having chances to score. On the final drive of the game, Pittsburgh needed a touchdown, and Pickett took a shot to the end zone and was picked off by Noah Igbinoghene to end the game. Other than the turnovers, Pickett was fine, but he didn’t throw the ball downfield much (although that can be attributed to play-calling, as well). He’s a rookie, and rookies sometimes make mistakes like those final two interceptions.

His seven-interception tally is a bit inflated when you could make a good argument that three of the seven aren’t his fault. Chase Claypool should’ve had the deep ball thrown to him in the Jets game that was an interception, and he fell down (or got pushed) on a throw last night that Justin Bethel ended up picking off. There was also the ball that went off Pat Freiermuth’s hands in the Jets game, although that was a ball that Pickett shouldn’t have thrown. You could go even further and say the last Hail Mary heave in that game shouldn’t be an indictment on Pickett, either. So while there’s no argument that Pickett could’ve made some better reads and some better throws last night, his interception tally is just a tad bloated compared to how he’s actually played.

And let’s be honest here, Pickett hasn’t been great, but you can’t look at his game last night or his interception total now and think that whatever happens, this year will ruin his career, as Jennings says could be the case. Sometimes, really good quarterbacks struggle as rookies. Pickett could be really good, or he could flame out, but you can’t really look at his body of work through three games and say the interceptions are the reason why he’s going to succeed or not in this league. There’s a lot of season left, and I’d like to see Pickett play better, and I sure as heck want to see Matt Canada call a more competent game offensively, and maybe that’ll help Pickett look a little bit better. Either way, he’s three games into his career. It’s too early to say whether or not he’s going to be a star or he’s going to be a bust.