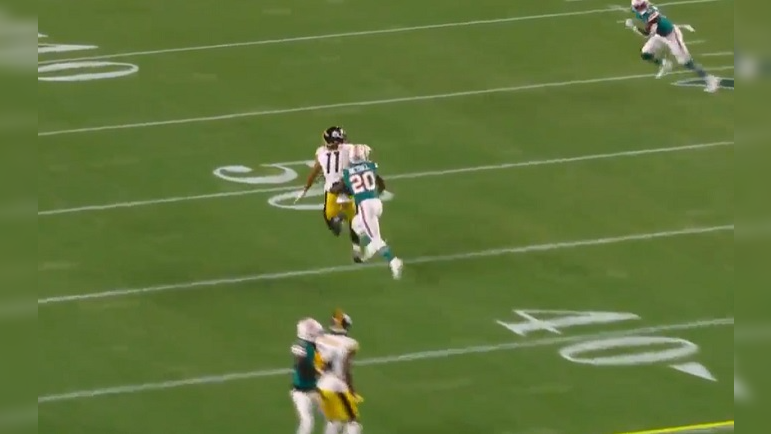 It ended up being a forgettable night for Pittsburgh Steelers rookie quarterback Kenny Pickett against the Miami Dolphins in primetime on Sunday Night Football inside Hard Rock Stadium.

In a 16-10 loss to the Dolphins, dropping the Steelers to 2-5 on the season, the rookie threw three interceptions, including two on the final two drives of the game to cost the Steelers a shot at victory.

Turns out though, the first of three picks on the night should have been wiped out due to pass interference on Dolphins cornerback Justin Bethel, at least according to NBC Sports rules expert Terry McAulay.

McAulay, a former NFL referee for 19 seasons from 1998 through 2017, stated that Chase Claypool was interfered with on the 2nd and 6 slot fade from Pickett with Bethel in coverage, in large part due to contact with Claypool’s feet while the football wasn’t in the air, the former official stated immediately after the play on Sunday Night Football.

You can see Claypool get tangled up with Bethel, allowing the veteran cornerback to make a play on the football for the easy interception. While it’s not all that surprising to see Claypool wind up on the turf again working downfield on a route, McAulay believes it should have been flagged for interference, wiping out the interception and giving the Steelers a sizable chunk of yardage in the process.

At the point of contact between Claypool and Bethel, there is certainly evidence that the veteran cornerback isn’t playing the football at all and is instead trying to get back in phase with Claypool, who beat him cleanly on the slot fade.

Pickett made the right decision giving Claypool a shot here downfield, especially in Cover 1 with a single-high safety.

The Steelers just didn’t get the call as the officials on the field viewed it as an incidental entanglement, causing the play to continue with no foul. It’s hard to hear McAulay believe it should have been pass interference though, considering it was a splash play in favor of the Dolphins and gave Miami a short field with a 7-0 lead already.

Maybe someday the Steelers will get the benefit of the doubt on those plays.