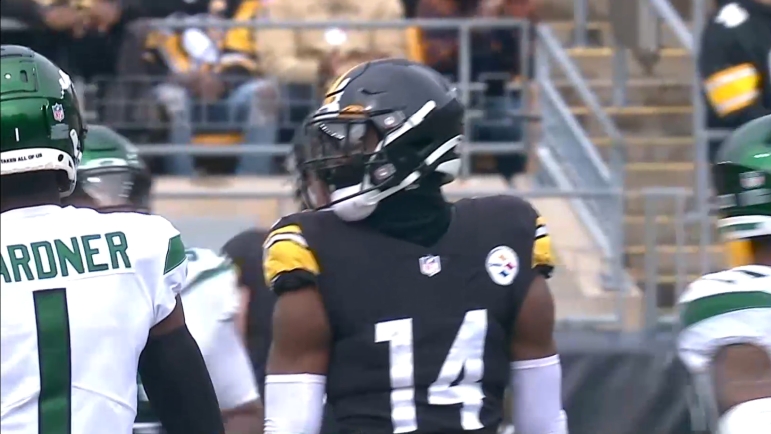 We’re four games into the 2022 season and rookie second-round pick WR George Pickens is coming off his best game as a pro, posting six receptions on eight targets for 102 yards in a loss to the New York Jets this past Sunday. Pickens did most of his damage in the second half when Kenny Pickett came in to relieve Mitch Trubisky, catching four passes for 71 yards in the rookie-to-rookie connection.

Bleacher Report’s David Kenyon recently highlighted Pickens in his personal rankings of the top rookie WRs at the NFL season’s quarter mark. Despite Pickens’ recent performance and the likely catch of the year he made the previous week at Cleveland, Kenyon ranked Pickens at #7 of his top eight rookie WRs.

“George Pickens looks primed for a dramatic rise,” Kenyon said on Pickens. “After making a Catch of the Year candidate—I mean, seriously, look at that picture—on the Cleveland Browns in Week 3, Pickens put together his strongest game of the season in Week 4. He notched six catches for 102 yards in the Pittsburgh Steelers’ loss to the New York Jets.”

Kenyon put Pickens above Tennessee Titans WR Treylon Burks who was chosen in the first-round last spring but has underwhelmed thus far in the regular season and is currently sidelined with a turf toe injury that should hold him out several weeks. Ranked ahead of Pickens are Romeo Doubs of the Packers, Alec Pierce of the Colts, Jahan Dotson of the Commanders, Garrett Wilson of the Jets, Chris Olave of the Saints, and Drake London of the Falcons who currently tops the list.

Statistically, Pickens has posted 11 receptions on 20 targets for 167 yards in four games this season. The receivers ahead of Pickens have totaled more catches, yards, and TDs to this point, but an argument could be made regarding Pickens overall impact and performance over the likes of Pierce and Doubs, particularly in the last two games.

Still, there is plenty of season left to be played and with Pickens’ role in the offense seemingly growing with each passing week, he should likely hind himself higher on this list by season’s end. Kenyon agrees, stating that Pickens with increased usage and the opportunity to draw more targets from Kenny Pickett could boost him up the ranks past several of his draft classmates.

George Pickens saw 5 targets on Kenny Pickett's 14 attempts, including penalties, in one half Sunday (35.7%).

“Check back in a month or two; it’s perfectly reasonable that Pickens may be pushing for a top-three position on the list,” Kenyon concluded on Pickens and his season-long outlook.