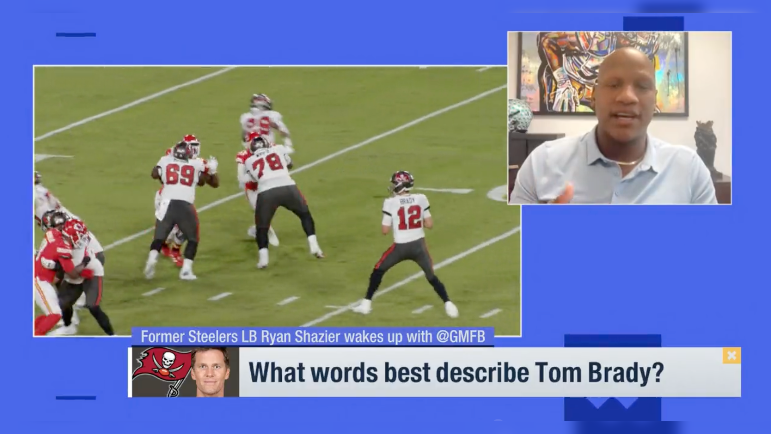 Anyone who’s been a football fan since the turn of the century knows exactly who quarterback Tom Brady is, and to Steeler Nation, he’s one of the most vilified players in recent memory. Formerly of the Patriots, he’s been a thorn in the side of this team for years, on multiple occasions being that immovable obstacle which prevented them from advancing deeper into the postseason. And in the eyes of many, the main reason QB Ben Roethlisberger didn’t win more Super Bowls.

This Sunday, the 45-year-old QB will head back to the Steel City once more, this time as a member of the Tampa Bay Buccaneers.

For former Steelers Pro Bowl linebacker Ryan Shazier, who joined the cast of NFL Network’s Good Morning Football Wednesday morning, there is certainly a track record to rattling Brady and throwing off his timing, and that’s in-your-face pressure.

“The one way to get pressure and to really beat Tom, is that we have to go up the middle, because obviously, he’s 45 years old, he’s not really mobile, and if you apply pressure in the middle of the defense, it causes him to move outta the pocket, and he’s not as accurate and as great as he normally is when he’s outside the pocket,” Shazier said on GMFB, according to video via the GMFB Twitter page.

Thanks to former @Steelers LB @RyanShazier for waking up with #GMFB
#HereWeGo pic.twitter.com/AhmT6xWCkW

When asked whether he has any type of hatred towards the Patriots, Shazier even chuckled a bit and said “Yeah, I definitely do,” but any Steeler fan naturally should harbor some ill-will, when we look back at the laundry list of shady instances involving the team such as “Spygate”, “Deflategate” or the infamous “Tuck Rule game” which, of course, featured Brady.

This past weekend, in two separate games, and one of which even involving Brady, we see instances of how he shifted the landscape as to how referees make roughing the passer calls. Ever since Brady went down with a torn ACL in 2008, the league has moved heavily toward protecting the QB at all costs, even if it means throwing comical flags such as the two we saw over the weekend.

refs called this roughing the passer on 3rd down and i genuinely do not know what Grady Jarrett could have done differently pic.twitter.com/VX6i0UpJiL

Shazier also touched on the topic of how banged up the Bucs’ offensive line is, and said knowing this, he’d go directly up to team captain Cam Heyward and deliver a simple message:

This is easier said than done, considering the team has only registered three sacks in four games since losing All-Pro DPOY T.J. Watt to a pectoral injury in the season opener. If the team lets Brady sit back in the pocket come Sunday, he will likely have a field day, so pressure is without a doubt needed if the team hopes to avoid the losing skid that it’s currently on.