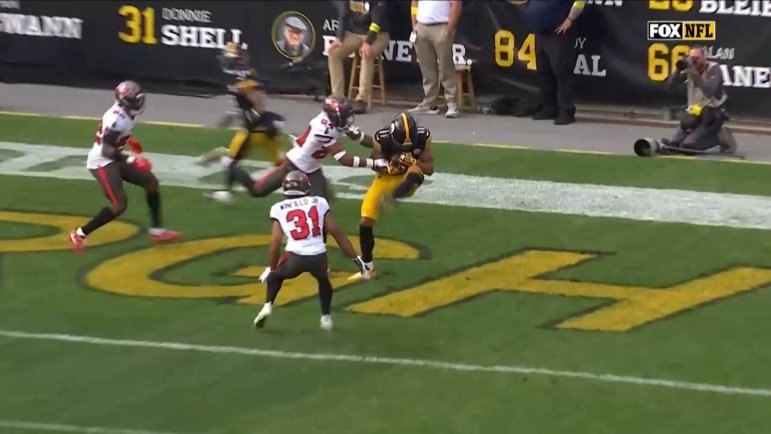 The Pittsburgh Steelers pulled off an improbable win Sunday against the Tampa Bay Buccaneers at Acrisure Stadium, winning 20-18. Pittsburgh went into the game down their top defender in T.J. Watt and also had most of their starting secondary out of the game with injuries, relying heavily on backups and guys recently signed to the roster to defend Bucs QB Tom Brady. Pittsburgh also lost QB Kenny Pickett to a concussion in the third quarter, prompting Mitch Trubisky to come in off the bench and help lead the Steelers to a win despite being big home underdogs.

Trubisky was able to silence his critics with the performance his put on display on the stretch on Sunday after being benched in favor of Pickett two weeks prior. The same could be said for WR #11 Chase Claypool who had been subjected to much criticism since last season, having failed to take the second-year leap in 2021 and looked to be falling behind George Pickens in the WR pecking order. Claypool’s effort in-game had been questioned as well as his willingness as a blocker being heavily scrutinized by many including our staff here at Steelers Depot.

However, Chase Claypool came up big on Sunday against Tampa Bay, leading the team in receiving with 96 yards while catching all seven of his targets with one catch going for a score. He averaged 13.7 YPR and posted his best game Week 5 of 2021.

During the game, we saw Claypool use his size and length better than in recent weeks with a constant criticism being that he doesn’t always play to his 6’4, 238lb frame. On his first reception of the game, we see Claypool run a whip route against #35 Jamel Dean as he keeps Dean on his backside and reaches out for the pass outside of his frame with arms extended. Claypool snags the pass and holds onto the ball with Dean contesting.

Just a couple plays later, we see Claypool take the handoff on the jet motion to the right side of the field, following his blockers as he uses his speed and size to pick up what yards he can before getting taken out of bounds.

Another key aspect of Claypool’s game that stuck out Sunday was his ability to pick up extra yards after the catch. Pittsburgh’s WRs had been terrible at picking up YAC on the year, but Claypool did a good job at using his size as well as his speed to turn up field and get what he could after the catch. Here is one example on a quick dump off to Claypool in the slot as he turns around at attempts to leap out of an ankle tackle, falling forward for extra yards and picks up the first down.

Here are a couple more examples of Claypool being mindful of the sticks as he makes the catches and stretches over the yellow marker to move the chains on multiple third-and-long situations for Pittsburgh.

We saw a lot more fight and effort from Claypool Sunday against the Bucs compared to the rest of the 2022 season as he was the hot hand in Pittsburgh’s WR core. The route running wasn’t great, but Claypool made a noticeable effort to fight for every yard after the catch like we see on this reception where he carries #45 Devin White and #54 Lavonte David for a couple extra yards.

Chase Claypool snapped the streak of Pittsburgh’s WRs not scoring a TD yet this season on this six-yard TD strike from Mitch Trubisky. We see Claypool line up in the slot and get behind S #31 Antoine Winfield Jr. in the end zone. Trubisky fires the pass to Claypool who secures the TD with #24 Carlton Davis attempting to get a hand in to knock the ball out, giving Pittsburgh the lead.

Claypool’s biggest play of the afternoon came on this game-clinching first down he managed to reel in along the sideline for 26 yards. On third-and-11, Pittsburgh was in-position to run out the clock against Tampa Bay if they got the first. Claypool runs across the middle of the field from the slot, but then adjusts vertically up the sideline to give Trubisky a target as he flees the pocket. Trubisky takes a shot to Claypool who somehow twirls around and makes the catch along the sideline, getting a toe in-bounds and manages to get a forearm down before falling out to move the sticks and ice the game.

Here is another angle of the play, showing the concentration and body control Claypool has to make the catch in coverage whilst coming down in-bounds to secure the reception.

Overall, Sunday was a redemption game for Chase Claypool who looked to be playing his way out of Pittsburgh to start the 2022 season. He came in the clutch on multiple occasions, catching three passes on third-and-long situations to successfully move the sticks as well as the go-ahead TD to top it off. Claypool played more to his size in this game, being able to win contested catches against Winfield, Dean, and David while also utilizing his physical gifts to make impressive catches along the sideline and pick up extra yards after the catch.

With Pittsburgh winning Sunday, the possibility of Claypool getting dealt before the trade deadline likely diminishes for a team that still believes that they are in this thing. While Pittsburgh could try and sell high after a good performance from Claypool, they will likely opt to keep him to see what the rest of the 2022 holds for the 23-year-old receiver who still has one year left on his rookie contract. Claypool still may be a raw player that needs to work on his route running and effort as a blocker, but Sunday was a great step forward for Claypool to show that he isn’t washed and indeed can make big plays when the offense needs him to step up.

What are your thoughts on Chase Claypool’s performance against the Tampa Bay Buccaneers? Do you think that it was a redemption game for him? Do you see Pittsburgh no longer entertaining the idea of trading Claypool after this most recent performance, or do you think that the team may tr and sell high while his value his up? Please leave your thoughts in the comments section below and thanks again for reading!