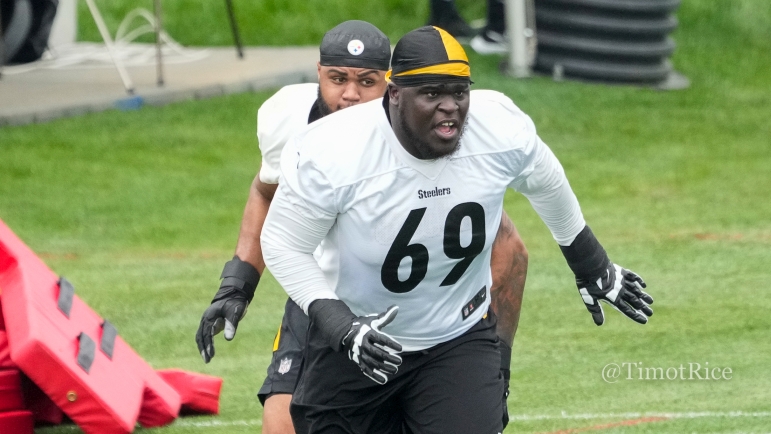 One of those linemen is third-year guard, Kevin Dotson. Dotson came in his rookie season and looked like he could be a staple of the Steelers’ rebuild along the offensive line as veterans like Maurkice Pouncey, David DeCastro, and Alejandro Villanueva all retired or moved on from the team around him. That feeling faded during his sophomore season as he hardly moved into the franchise guard territory. There were some early offseason reports about the team being unhappy with him, but those reports were later recanted by other sources. However, an injury to start training camp didn’t help him prove those reports wrong. Health wouldn’t prove to be on his side the rest of the year as he ended up spending the final eight games of the regular season and playoffs on the Reserve/Injured List due to an ankle injury.

The bar may have been set too high for Dotson after showing some promise in 2020, but his play has proved to be on par with the rest of the improved offensive line in 2022.

Let’s take a further look at his play in week four against the New York Jets.

One part of Dotson’s game I’ve always enjoyed is his combo blocks. While not the best athlete, he’s still able to reach guys at the second level and get them locked up. Below are two examples of him being able to work up to Jets’ linebacker Kwon Alexander. In the second clip he’s able to get a cheap pancake as Alexander slips trying to set his feet against Dotson.

The other thing you’ll never have to worry about with Dotson is his ability to find work in the passing game. Here, he gets himself a nice slab of Jets’ rookie Michael Clemons’ ribs.

This was my favorite rep of the game from Dotson. He’s working against Jets’ defensive tackle Nathan Shepherd and absolutely bullies him off the line of scrimmage and drives him roughly 10 yards down the field. It helps clear the way for Najee Harris’ longest run of the day of 16 yards. If you watch closely at the bottom right corner, Dotson is rightfully fired up after the play.

The very next play, Shepherd gets back a little at Dotson, ripping him down by his facemask. There was no flag on this play.

Dotson saw his fair share of Quinnen Williams and had a pretty up-and-down day against the former number three overall pick in the NFL Draft.

In the first play on the clip below, Harris likely scores behind Dotson if Mason Cole and James Daniels are able to complete their double-team on #98 for the Jets. On the other two, Dotson handles Williams well. First, on a one-on-one in pass-pro, and in the second he has Williams locked up well before the double team from Daniels comes.

The below clip definitely isn’t the best from Dotson who can’t corral Williams slanting across the center and his face. However, at the same time, Dotson seems content with letting Williams run up the arc, as he assumes Trubisky is still in the pocket.

This is where Dotson’s lack of athleticism comes into play. He’s unable to keep up with Williams and unfortunately, as Tribusky has shown numerous times on tape, is busy staring down his first progression while drifting toward it. He ends up right in the waiting arms of Williams on the sack. It goes down as the first sack given up by Dotson all season, according to PFF.

In the next clip, the Jets run the same interior slant upfront as the previous clip with added pressure from the off-ball linebacker. You see Dotson’s attention is fully on the linebacker as the defensive tackle, Williams is slanting over. With the other DT slanting, Steelers’ center, Mason Cole, slides right and leaves Dotson to get Williams. Again, Dotson finds himself not quick enough to keep up with Williams as slips through giving a big hit to quarterback Kenny Pickett. Props to Pickett for standing in and nailing this throw.

This next clip starts out as a nice rep from Dotson as he begins to walk back Williams, but gets his hands too far outside. When Harris cuts back, it leaves Dotson holding when he likely didn’t need to.

Dotson also was flagged for an illegal man downfield in the third quarter, but it’s hard to blame him as it was an RPO that Kenny Pickett scrambled before throwing. It’s tough to pin flags on a lineman in that situation as anytime you call an RPO, and don’t get the ball out immediately, they’ll be at risk for being downfield simply by the play design.

We’ll leave on a higher note. Here, you can see an offensive line that is starting to get it. While it’s only a four-man rush, watch as Dotson, Cole, and Moore, all work in unison to successfully pass off their guys. Great rep all around.

Right now, Dotson is a serviceable guard on a serviceable offensive line. His lack of athleticism will always limit his overall ceiling, but he’s someone you can win with. Sunday, against the Jets, he showed you exactly what the ups and downs of his game are.

What have been your thoughts on Kevin Dotson four weeks into his third NFL season? Let me know in the comments!