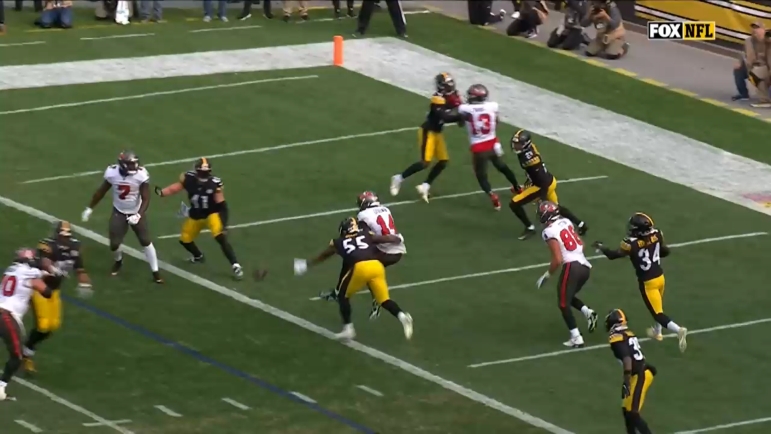 Week after week, Pittsburgh Steelers fourth-year linebacker Devin Bush continues to improve in many facets of the game.

Fully recovered from the torn ACL he suffered in his second season that really hindered him in his third season, Bush is looking like he’s getting closer to that confident, productive linebacker the Steelers believed they were getting when they traded up into the top 10 in 2019 to acquire the star Michigan defender.

Healthy and playing with confidence, Bush is allowing his natural abilities and overall instincts to take over on the field, which led to arguably the best game of his career on Sunday against the Tampa Bay Buccaneers at Acrisure Stadium while playing 46 defensive snaps in the 20-18 win.

This isn’t to suggest that he’s looking like a top 10 caliber linebacker all of a sudden, or anything like that. It simply means he’s getting better and better each and every week, showing real improvements playing next to veteran inside linebacker Myles Jack, earning praise from head coach Mike Tomlin in the process.

“I thought his performance was really solid, and it’s been on the upswing all year,” Tomlin stated of Bush’s play, especially Sunday against the Buccaneers, according to video via the Steelers official YouTube page.

Bush has gotten better and better, and Sunday was another example of that, finishing with five tackles and the game-saving pass defensed at the goal line on the 2-point attempt from Tom Brady to Chris Godwin. Those tackle numbers might not be eye-popping, but there’s a lot more that goes into linebacker play than just tackles.

Let’s dive into the tape.

One thing that is very noticeable with Devin Bush is his aggressiveness working downhill right now. In the past, he was too conservative in that department. Granted, that can still be an issue at times, but he’s a more aggressive, attacking linebacker rolling downhill towards the line of scrimmage as a run defender.

Early on against the Buccaneers, he helps clog up the lane here by coming downhill with strength to take on rookie tight end Cade Otton. By being aggressive and meeting Otton in the hole, Bush clogs everything up behind the rookie tight end, keeping fellow rookie H-back Ko Kieft from being able to get through the hole on the trap, slowing Leonard Fournette up in the process, leading to the tackle by Cameron Heyward along the line of scrimmage.

Again, another display of aggressiveness coming downhill to take on the lead blocker in the hole. Right along side Jack, Bush fires downhill at the snap to meet Kieft in the hole, causing Fournette to bounce the run to the outside. Of course, ideally there’s a help defender there on the outside that Bush is helping bounce this run to, but he did his job well here, attacking downhill to take on the lead blocker at the line of scrimmage.

Here in coverage against Fournette on the route out of the backfield, Bush plays this very well.

In the past, Bush would be a bit too aggressive here, racing to the spot the receiver is at, leading to some struggles on option routes, losing quickly against the receiver with the change of direction here. Watch the way he closes the gap to Fournette, but stays square to him and patient.

Once the ball is thrown, Bush does a good job of tracking Fournette and making the open-field tackle for a short gain.

Later on the same drive, Bush does a good job of scraping over against the run to work his way back into the hole, helping out Jack in the process.

It’s not exactly the way you draw it up when teaching a linebacker how to scrape over into the hole, but he does a good job of staying assignment sound initially, squeezing down on his gap to take away the cutback before then working all the way over into the lane, getting around a block from Tampa Bay rookie left guard Luke Goedeke to get in on the tackle.

This was one of Bush’s best plays against the run on the day.

That’s the type of linebacker the Steelers need Bush to be. Based on the film it really feels like playing alongside Jack — who is a thumper downhill against the run — is starting to rub off.

In the win on Sunday, Bush earned his highest coverage grade of the season from Pro Football Focus, and outside of the 2-point conversion defense, it likely had to do with plays like this.

In coverage against Tampa Bay tight end Cameron Brace, Bush does a great job of staying light on his feet, opening up his hips to run with Brace on the route, sticking in Brate’s hip pocket, taking away an initial read from Brady, forcing him to hold the football longer and eventually fire incomplete.

Again, it’s not one that’s going to show up in the box score, but he played this route very well and was in position to defend the pass if Brady would have tested him here.

This play right here though, this was his best play of the day.

Tremendous job of reading his keys seeing the Tampa Bay center pulling. Bush is right on his hip and covers a ton of ground to meet Fournette at the line of scrimmage, wrapping him up for the tackle. That’s quite honestly one of the best reps against the run I’ve ever seen from Bush at the NFL level.

He’s processing things a bit quicker, is playing with a ton of confidence based on trusting what he’s seeing, and he’s running to the football. That’s an awesome play by a guy who is truly starting to find his game.

Bush works so well in tandem with Jack at inside linebacker. There’s real chemistry there and confidence in one another at this point in the season. Jack does a great job of attacking the lead blocker in right tackle Tristan Wins, while Bush does a great job sliding over into the hole, using his eyes to take him to the football to meet rookie running back Rachaad White head-on in the hole for the short gain.

That’s how a linebacker group is supposed to work together. Teach tape right there.

Finally, on the 2-point conversion it was Bush’s eyes and overall feel for the concept that led him to make the play.

You can see him communicating pre-snap with safety Terrell Edmunds, relaying what they’re going to do on the play.

Slowly but surely, Bush is improving. That’s a welcome sign moving forward for a Steelers defense that should have some reinforcements on the way.