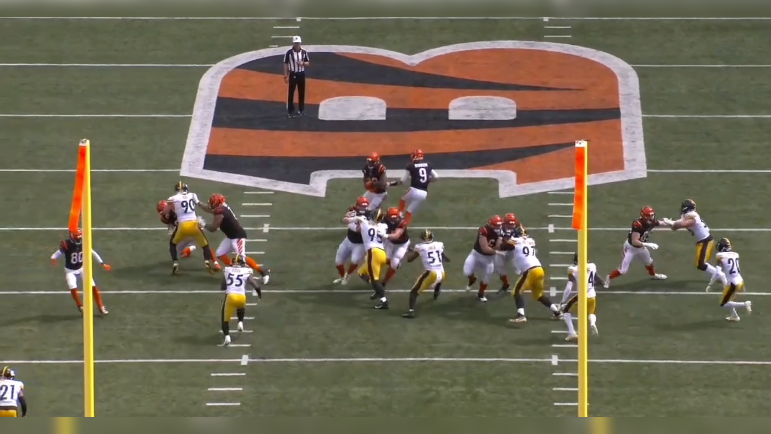 Three preseason games and very little signs of improvement had fourth-year Pittsburgh Steelers linebacker Devin Bush facing an avalanche of criticism entering his contract year with the black and gold, this coming off of a disastrous 2021 season in his return from a knee injury.

During those three preseason games, Bush continued to look tentative, disinterested and like he was going through the motions. Teammates and coaches continued to express belief in him though, much to the surprise of many.

Turns out, that belief was warranted in Bush coming out of the Week 1 performance he put up against the Cincinnati Bengals on the road inside Paycor Stadium.

Granted, Bush was still graded poorly by Pro Football Focus with just a 49.2 overall grade in Week 1, but the All-22 tape showed a linebacker willing to come downhill, mix it up with blockers and get in on plays, trusting his eyes and flowing like he once did as a rookie after the Steelers made him the No. 10 overall pick in the 2019 NFL Draft.

In 51 snaps on Sunday against the Bengals, Bush recorded five tackles and was an instrument part in the Steelers’ defense limiting Joe Mixon in the ground game. While Bush still caught flak for having just five tackles (two solo) on Sunday, much of what he did against the Bengals won’t show up in the stat sheet. It’s just that simple. That said, he affected a lot of plays, especially on the ground, and really communicated well, playing with confidence within the scheme.

Let’s dive into the tape.

The biggest area of concern for Bush coming into the 2022 season was his struggles in the run game, specifically coming downhill and getting off of blocks. Though that still remained an issue at times against the Bengals Sunday, there was a very greater emphasis on his willingness to fire downhill and mix it up with blockers, much more than we’ve seen from Bush last season and into the preseason.

Early on, I loved the way he stayed half-man against Cincinnati left tackle Jonah Williams in the run game, using his hands to get inside and gain some leverage against the tackle, allowing Bush to slide off and occupy the run lane for Mixon, ultimately turning Mixon back inside to help.

Though Bush won’t get credit for a tackle on the play, it was a really strong start from a fundamental standpoint to his performance Sunday.

Against the Bengals Bush really seemed to trust his eyes to take him to the football. He read his keys very well and his feet matched up with his eyes, putting him around the football quite a bit.

Here against the run once again, Bush does a good job reading his keys and attacking downhill at the snap. The only real concern I have with the rep is that he doesn’t quite finish it. He loses a bit of aggressiveness once he sees wide receiver Tee Higgins coming in for the block. While Bush does a good job taking it on and thumping Higgins in space, I would have liked to see him try and slip this block and make a play overall.

That said, it’s great to see him where he’s supposed to be, leading to the big hit from Minkah Fitzpatrick on Mixon for the short gain, in large part due to Bush’s sound assignment football.

This was one of my favorite plays from Bush in Sunday’s win. You can see him moving around pre-snap as the Bengals shift things around. He knows where he’s supposed to be and does a good job reading the center moving to the second Lele quickly to try and reach him.

Bush comes with strength to the point of contact and stuns the center bit, allowing him to slide off. He then works through additional trash to get to Mixon, assisting on the stop with Myles Jack and Cameron Sutton. Too often in the past in those situations with Bush, that lineman would swallow him up, but he does a really good job of attacking downhill and firing his hands, giving him some space to operate.

Again, Bush’s eyes and ability to read keys on Sunday were really sound. When he’s able to read and react, he still has the athleticism to fly around and get to spots faster than blockers.

That showed here on this rep. He beats the Cincinnati center to the spot on the outside zone run, forcing Mixon to slow up and search for the cutback. Bush maintains his assignment though and is able to work back across the center’s face to make the stop with Malik Reed for the short gain.

This next play is definitely one that won’t show up in the stat sheet, but really mattered for Bush.

Late in the game the Bengals tried to maintain some balance with the run game. There’s a huge gap that opens between right guard Alex Cappa and right tackle La’el Collins running downhill against Bush. He does a good job of filling the lane quickly while staying square to the line of scrimmage.

by filling the lane here, coupled with Chris Wormley shoving Cappa back into Mixon, the Bush and the Steelers defense are able to clog things up quickly, shutting down the run play before it can get started.

Finally, late in the game Bush made a huge play that also won’t show up in the stat sheet.

With the Bengals facing a third and goal with the tying touchdown just yards in front of them, Bush blew up the shovel pass to tight end Hayden Hurst.

He doesn’t get credit for the tackle at all, but his ability to read his keys and beat rookie guard Cordell Volson inside forces Collins to try and recover and get a hand on Bush, who is right in the lane. Tying up two blockers clogs up the lane for Hurst, allowing Bush’s teammates to get there for the stop.

One play later the Bengals had a turnover on downs as the Steelers’ defense stood tall. A lot of that had to do with Bush’s play on the shovel pass.

Though he wasn’t on the field much in passing situations, being substituted out of the game for Robert Spillane, Bush had two solid plays in coverage Sunday that should draw some praise.

The first one came in the first half on the play that injured Cincinnati receiver Tee Higgins.

Bush is in the middle and has anything coming inside. Though Higgins makes the catch for seven yards, Bush does a fantastic job of communicating with his defensive backs, passing Hurst off up the field, picking up Higgins on the crossing route.

Once Joe Burrow breaks out of the pocket to extend the play, Bush is pushed off a bit by Higgins but does a good job of recovering and getting back into phase with Higgins, making the stop short of the sticks.

Later in the game in overtime, Bush is matched up with backup running back Samaje Perine on the boundary with the Bengals in empty. That’s not exactly an ideal position for Bush to be in, but he handles it perfectly.

He never panics, moves his feet and flips his hips at the right time, squeezing Perine to the sideline making it nearly impossible for Burrow to complete the throw, which he doesn’t do.

Overall, Bush didn’t have many plays that stood out on the stat sheet, but the All-22 revealed a real show of improvement from the fourth-year linebacker. The Brian Flores influence seems like it’s starting to take hold on Bush, and that’s nothing but a massive positive for the Steelers moving forward.