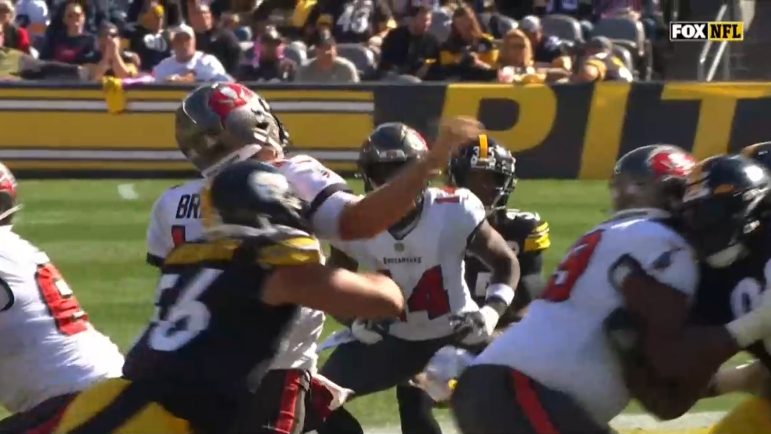 The Pittsburgh Steelers pulled off an improbable win Sunday against the Tampa Bay Buccaneers at Acrisure Stadium, winning 20-18. Pittsburgh went into the game down their top defender in T.J. Watt and also had most of their starting secondary out of the game with injuries, relying heavily on backups and guys recently signed to the roster to defend Bucs QB Tom Brady. Pittsburgh also lost QB Kenny Pickett to a concussion in the third quarter, prompting Mitch Trubisky to come in off the bench and help lead the Steelers to a win despite being big home underdogs.

However, the defense stood out for their performance as well against Brady and a lethal Buccaneers offense. The former Patriot had haunted Pittsburgh for years in their former AFC conference battles, seemingly picking apart the Steelers’ secondary and ending their hopes and dreams of winning a Lombardi Trophy on multiple occasions. Pittsburgh was ready for the GOAT in possibly his final appearance against them, though, using a rag-tag group of defenders to take down Brady and the Bucs.

Since Watt got injured in Week 1, OLB Alex Highsmith has had to step up as Pittsburgh’s #1 pass rusher off the edge. From a production standpoint, Highsmith has delivered, now leading the NFL in sacks with 6.5 through six weeks of play. The sack he recorded on Brady in this game comes on this play where he dips under LT #76 Donovan Smith with a ghost move, clearing Smith’s outside arm with a rip through into the pocket as he turns the corner into Brady as he winds up to throw. Highsmith strips the ball while taking Brady to the ground, resulting in the strip sack which #14 Chris Godwin recovers.

That strip sack was Highsmith’s only recoded tackle on the game, but he also made an impressive play in pass coverage. On Tampa Bay’s first offensive possession, we see Highsmith drop back into zone coverage near the middle of the field and quickly reads Brady targeting Godwin on the slant pattern. Highsmith meets Godwin as he attempts to make the catch punching the ball out to force the incompletion. Normally, it wouldn’t be wise for Pittsburgh to drop their best pass rusher into coverage, but Highsmith makes the play here.

Just the play before the pass breakup, we see Highsmith doing work against the run. Notice how he lines up on the left side and drops his shoulder into the pulling guard, taking on the block to free #51 Myles Jack to run after the ball and make the tackle on #7 Leonard Fournette. I would like to see Highsmith play with his shoulders square to the LOS rather than give his back to the running back, but a good job overall to free up the ILB to run free to the ball.

Still, while there were moments that Highsmith looked solid in run defense, I kept noticing issues with him setting the edge and keeping outside contain. On the first clip, we see Highsmith, Jack, and #97 Cam Heyward all clog up the left side A & B gaps, but leave the corner unattended, allowing Fournette to run untouched into the secondary. In the second clip, we see Highsmith get a one-on-one situation with the TE on the end of the LOS. Highsmith does a great job getting hands on, but doesn’t man hand the blocker with his outside arm, allowing the TE to keep him from keeping the edge, thus allowing Fournette to run right off the TE’s back into the second level for a modest gain. This could be due to scheme, but Highsmith does need to do a better job of forcing runs back inside with discipline and sound technique.

One thing I also noticed from Highsmith in this contest was that outside of the strip sack on Brady, he largely was ineffective on putting pressure on the QB as a pass rusher. Donovan Smith and #78 Tristan Wirfs did a good job sealing him off on the edge, forcing him to extend his rush around the arc of the pocket in hopes of beating them around the corner.

Here is one example of Highsmith attempting to round the corner on Smith but is just a little too high on his rush lane, needing to flatten more to take a better angle to Brady as Smith catches him and kindly escorts him out of the play as Brady finds an open receiver in the end zone, but the pass is dropped.

Overall, it was great to see Alex Highsmith recapture the single-season sack lead in the league, especially against Tom Brady in what would be a Pittsburgh Steelers victory. Watt led the league in sacks last season, and Highsmith is trending to finish near the top of that list in 2022, sitting at 6.5 sacks with Maxx Crosby, Nick Bosa, Khalil Mack, Von Miller, Micah Parsons, Matt Judon, and Rashan Gary all sitting at six.

Still, while Highsmith may be leading the league in sacks, he hasn’t arrived to the level of dominance that Watt has in recent seasons or other famed Steelers great pass rushers like James Harrison. He has already surpassed his sack total for last season in six games, but still has more room to grow in terms of creating more consistent pressure on the QB and setting the edge against the run.

However, Highsmith was never meant to get confused for the caliber of player like Watt or Harrison as the hope for him this season was to develop into a quality running mate opposite Watt. By all accounts, Highsmith has accomplished that task and appears the be playing himself into a double-digit sack campaign and likely big pay day next offseason should he keep this production going.